Robots: Where sports and science meet 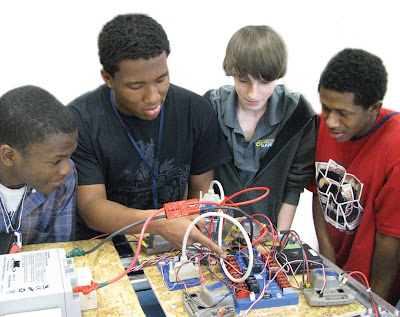 The arena thundered with the sounds of cheering and applause. Audiences did the wave. Buzzers blared. The announcer’s voice boomed over the loudspeakers. Cheerleaders and school mascots urged their teams to victory.

But on the field, the athletes weren’t human: they were made of metal, plastic, and circuit boards. The only humans – area high school students – were behind clear plastic screens, using remote control to guide their robotic creations.

Three area teams competed last weekend at the FIRST Robotics competition at Hale Arena. Teams from across the Midwest converged on Kansas City to take part in the event. Grandview High School ranked 46th, Hickman Mills High School ranked 35th, and a team from Touch of Grace ministries – the only church to compete – ranked 33rd.

The robotics competition was created in 1989 to encourage student interest in science, technology and engineering, and it has evolved into several major competitions held across the country. This year, student teams built robots to play a soccer-like game called Breakaway.

In Kansas City last weekend, the atmosphere of Hale arena was more like a major sporting event than a science and technology competition.

But in some ways, that’s the point.

Clark Vance, a teacher and robotics coach at Grandview High School, said the program allows some students the experience of competition who might not otherwise get it.

That being said, one member of Grandview’s robotics team who Vance calls “Mr. Reliable” is already familiar with the roar of the crowd.

Jarvis Jones, a senior, is the captain of Grandview’s varsity football team and he’s also the team leader for Grandview’s robotics program.

He doesn’t see much distinction between the two.

“Robotics is like a varsity sport,” Jones said. “It’s also a good way of learning engineering, science and technology.”

Like many kids in the program, Jones said he plans to pursue engineering after high school, and that he feels the robotics program is a great hands-on opportunity.

Jarvis and his teammates got a chance to do some last-minute, real-world problem solving during the competition. On Saturday, the computer they use to control their robot, “RoboDog,” went bad.

With some help from another school, the students installed another computer and got RoboDog up and running with only a few minutes to spare. While they didn’t place in the competition, the excitement and joy on the Grandview students’ faces couldn’t be disguised.

Todd Barney, one of three robotics coaches at Hickman Mills, pointed out two malfunctioning chains that help the robot move.

“The kids are doing a great job, but the drive team (students who operate the robot via remote) are taking the brunt of the pressure,” Barney said.

While the Hickman Mills drive team took a much-needed rest, Barney supervised other students who were trying to fix the technical glitch.

One of them, Jerry Novak, a sophomore, said he relished the challenge.

“In this competition, I’ve learned not to get frustrated and just keep cool, no matter what happens,” Novak said.

He said he expects the experience to pay off.

“I want to go into engineering, and I consider this the first step of my career,” Novak said.

One team from Grandview stood out at the competition. Not only were they the only area team to place, but they were the only team in the entire event that was from a church.

Sherri Hall is the robotics coach for the team from Touch of Grace Ministries, affiliated with the Second Missionary Baptist Church in Grandview.

Hall said it wasn’t easy to be taken seriously as a church team competing against high schools.

“Funding was a major challenge,” she said. “A lot of the corporate sponsors will not sponsor religious organizations. We had to work extra hard to get that funding.”

Thanks to the Kauffman Foundation, they got it, and the kids got to take their robot to the competition.

What makes their team unique, Hall said, is that it’s open to anyone.

“These kids are all from different schools, but they go to the same church,” she said. “But anyone can be on this team.”

Hall said she was pleased the team placed, but winning isn’t what it’s all about.

“Some of our kids would not be exposed to this even in their schools,” she said. “They’re learning real-life lessons like how to manage their time, how to work on a project as a team, and how to collaborate and set goals. The big thing is learning how to overcome obstacles.”

Like most other teams at the competition, the Touch of Grace team struggled with last-minute technical problems. A few minutes before a match on Saturday, the robot’s “kicker” went bad.

“They’re working on a solution and they’re doing it together,” Hall said of the children, her face beaming with pride.

Darryl Holland directed other students as they fixed the kicker. Like Jones, Holland is also a “traditional” athlete who has turned his attention to robotics. He currently runs track and hopes to do that professionally or go into marketing. Either way, he said, the robotics program has prepared him for life in general, not just a career in engineering.

“This has really helped me as a person to learn to work with others,” Holland said. “Friday, our drive train broke, and then our sprocket started messing up. We have had to come together to figure out how to solve these problems.”
Posted by Jackson County Advocate at 4:45 PM