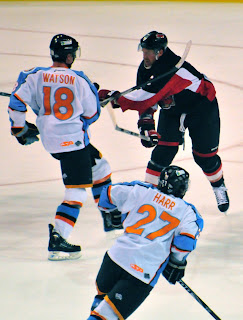 “Among the injured were…” is a good lead when writing about an Irish wedding reception or a Missouri Mavericks hockey game.  However these stoic Knights of the Ice seem impervious to pain, wrack, and ruin, and lend dignity to what otherwise would resemble a vulgar brawl.  No body check, no flying disk, slash, hook, or fists of an opponent that felt physically insulted keep the warriors of the rink from continuing their joust with puck and stick.
Saturday night, the Missouri Mavericks took on the Odessa Jackalopes in front of a sold-out crowd of 5800 screaming fans at the Independence Event Center. The Mavs beat the Jackalopes by two goals in a shootout after a 3-3 tie during regulation play and one overtime.
The last home game of the regular season was critical to the Mavs, who currently hold tight to 5th place in the Northern Division of the Central Hockey League.  Depending on the outcome of the next three away games and the win-loss record of the sixth place Tulsa Oilers, the Mavs have an excellent chance of participating in the CHL playoffs beginning next week.