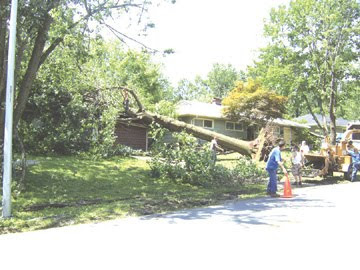 “It was five minutes until 10am, and I was getting ready for church,” said Vanessa Claborn-Welch, who lives in the Avalon View neighborhood. “When the hail came, I stepped onto my front porch to have a look outside. That’s when I saw it…the clouds were spinning, and I saw them lower to the ground. I said, ‘Oh God! That’s a tornado!’ I started praying for my family and neighbors. The sound was incredible, and you could hear the trees cracking. Then it was over. It was quiet, and the sun came out, and my neighbors all came outside to find a mess. It was dramatic.”
In the winds’ wake, more than 1,000 trees were toppled, crushing homes, power lines and vehicles across South Kansas City. The windows at Baptiste Educational Center were also damaged.
Mayor Mark Funkhouser held a press conference Sunday afternoon at Clark Ketterman Park, near 107th Street, to announce that the city was assessing the damage and would provide clean-up assistance to residents. 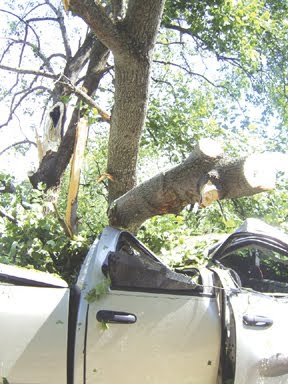 “Thankfully no one was hurt in Sunday morning’s freak storm,” he said. “Now it’s time to get our neighborhoods back to normal. The city will do everything we can to help as residents complete the clean-up.”
By Monday, thousands of residents were still without power. A KCP&L bucket truck at the scene got stuck in mud in Clark Ketterman Park Monday afternoon, and a special tow truck had to assist.
With damaged roofs, spoiled food, and no air conditioning, many residents made calls to the city for help. In response, KC and the Kansas City Chapter of the American Red Cross opened an emergency shelter for victims at the Hillcrest Community Center at 10401 Hillcrest Rd.
“We appreciate the patience of our residents and the assistance other agencies like the Red Cross have offered us during this time of need,” said Troy Schulte, acting city manager.
Meanwhile, city crews worked to remove downed trees and hazardous limbs in streets and  public rights-of-ways, while neighbors pitched in to help one another dig out from tree branches that had fallen onto their homes and cars.
To assist residents in their clean-up efforts, KC is providing a special curbside woody debris pickup in the area bounded by 95th Street to the north, Raytown Rd. to the east, 119th Street to the south and Blue River Rd. to the west. The special pickup will begin Monday, July 19 at 7 a.m. Residents must have wood debris piled at the curb. Small brush should also be placed curbside in bundles four feet or less in length or placed in paper yard sacks. Trash is not to be combined with woody debris from the storm. Residents can also take advantage of the city’s no-tag period through 16. During a no-tag period, excess trash beyond the two-bag limit may be placed curbside without an Excess Trash Tag.
In addition, the city’s Leaf and Brush Drop-Off center at I-470 and Raytown Road will also be open to residents between the hours of 8 a.m. and 6 p.m. through Sunday, July 18.
“I want to thank the City’s Parks crews, the private contractors and neighborhood residents for all their hard work in cleaning up the aftermath,” Mayor Funkhouser said.
Residents wanting to report downed trees in the public rights-of-ways or other storm issues should contact the 3-1-1 Action Center by calling 311 or 816-513-1313.
The National Weather Service stated Monday that straight-line winds, not a tornado, was to blame for all the damage. Officials have said that the wet winter and spring have saturated the ground, making it easier for trees to uproot in a severe storm.
“I’ll never believe it wasn’t a tornado,” said Vanessa Claborn-Welch. “I saw it spinning.”
Posted by Jackson County Advocate at 3:49 PM