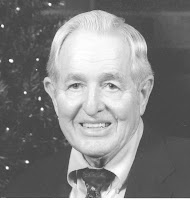 Jim was born January 15th, 1926 in the family home on Botts Rd in Grandview, MO, and worked the family farm with his mother, Fanny Lillard Robinson, and father, Fayette Arthur Botts, as well as his 3 siblings: Mary Eleanor Young, Fayette Botts, and Margaret Heafer, all preceding him in death.

Jim’s interests were varied.  He co-founded Ray & Botts TV, worked in the electronics industry for Bendix, and retired from the U.S. Postal Service in 1991.  He played an active role in his community as President of the School Board, Optimist Club, and Historical Society.  He was on the Board of Directors of the Grandview Bank and Trust, and was a valued leader of Boy Scout Troop 552, District Commissioner, and a Tribe of Mic-o-say Honorary Warrior.

Jim’s community involvement was only eclipsed by his love for his church family, where he was very active in many roles, including over 50 years of Priesthood service.

Jim was particularly proud of being Grandview Citizen of the Year in 2004, and Grand Marshall of the Harry’s Hay Days Parade.

Jim, loving husband, father, grandpa, uncle, cousin, you were kind and considerate and will be missed greatly.  Thank you for the love you shared with us for many years.

In his continuing spirit of giving, Jim donated his body to the KU Medical Center.  In lieu of flowers, the family suggests donations to Grandview Assistance Program, G.A.P, or KC Hospice, 12000 Wornall Rd, KC, MO.
Posted by Jackson County Advocate at 3:42 PM