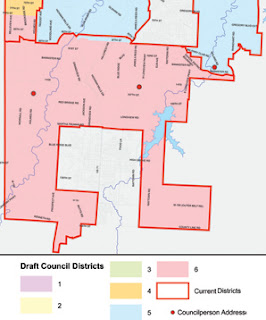 By Andrea Wood
Class. Race. Politics.
The lines have been re-drawn, not only for Kansas City’s six districts, but also for some groups who found themselves on opposite sides when it came to which map would represent the city’s new boundaries.
The Kansas City Redistricting Committee last month presented two options for the city’s new council district boundaries: map 17, and map 13 on its second revision.
On Thursday, the KC City Council adopted map 13 Revision 2 (a portion shown above) for its city council districts. The map was favored by African American organizations in the 3rd and 5th council districts, citing that other maps could possibly violate the Voting Rights Act by diluting the vote in historically black neighborhoods.
However, the Hispanic community favored map 17, which kept together neighborhoods in which they historically resided.
Also split were the 6th District’s two councilmembers, John Sharp and Cathy Jolly.
Sharp was opposed to map 13, and was one of only two councilmembers to vote against it. He said that the 6th District--which wraps around Grandview--is divided into a “west side” of more affluent neighborhoods near State Line, and the “east side” where he lives, which had encompassed all of the Hickman Mills School District as well as Ruskin.
The map adopted by the city council on Thursday takes 800 or so residents between 87th and 85th Streets in the Hickman Mills School District and moves them into the 5th District. Then, according to initial figures, some 6,000 residents around the Ward Parkway Shopping Center are being moved from the 4th District to the 6th District.
“If you make that kind of shift in voting strength, it would be very likely that in future elections the 6th District would be dominated by the larger number of voters in the more affluent neighborhoods in Ward Parkway,” Sharp said during the council’s business session.
Jolly, who lives on the west side, said she was concerned about statements that pitted neighborhoods against one another, such as saying that one area was affluent and the other area was working class.
“We are more alike than we are different,” she said of the new addition to the 6th District.
During public testimony, Hickman Mills School Board Member April Cushing and Rev. Dale Shotts of St. Luke’s United Methodist Church both asked the board not to divide the school district into different council districts. The map which was adopted will have some in northern portion of Hickman Mills C-1 shift into the 5th District.
Sharp said he was disappointed in the council’s decision to adopt map 13, and said the Hickman Mills and Ruskin areas were being disenfranchised by the new boundaries.
“We’ve seen our political voice diluted,” he said.
While the map is effective 10 days after the council vote one week ago, the redistricting argument is far from over.
The city will look again at its district maps once the official data from the 2010 Census is released sometime in 2011.
Posted by Jackson County Advocate at 11:07 AM