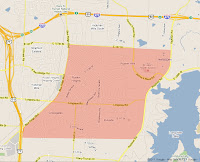 By Seann McAnally
J.C. Advocate
South Kansas City is benefiting from a federal program that could turn the tide of foreclosures in the area – and potential homebuyers can take advantage of big savings in the process.
City Councilman John Sharp says five subdivisions in the Ruskin area have been targeted for Kansas City’s Neighborhood Stabilization Program.
The federally funded program, which is entering its third phase, aims to purchase and completely rehabilitate vacant, foreclosed homes and market them to qualified buyers, who can get a grant to pay 20 percent of down payment. That way, a buyer can get into a completed rehabbed home with a full two-year warranty, and only have to finance 80 percent of the purchase price.
Some $1.8 million is available for this phase of the program, which has already been through two previous funding cycles. Eligible areas include parts of Ruskin Heights, Ruskin Hills, Kirkside, Crossgates and Bell Acres. The boundaries are Blue Ridge Blvd. on the west, Raytown Rd. on the east, 107th St. on the north and 119th St. on the south.
City Councilman John Sharp says he pleaded with other city officials to target the Ruskin area specifically – which has been hard-hit by foreclosures – rather than piecemeal the process all over the city.
“Concentrating our efforts to renovate and sell vacant houses in the Ruskin area will really make a positive impact on these neighborhoods,” Sharp said. “It makes a lot more sense than just doing one or two house in neighborhoods throughout the city, which doesn’t have much impact.”
In earlier phases of the program, 30 vacant, foreclosed homes in the Hickman Mills School District were purchased, and 27 of those were completely renovated. About 50 homes in total have been purchased and rehabbed throughout the entire city.
More than a dozen homes have been sold so far through the program in Kansas City’s Sixth Council District.
The city itself doesn’t actually purchase the homes, Sharp said, but does administer the federal funding. Not-for-profit community groups receive grant funds to purchase and rehabilitate the homes. Such organizations include Neighborhood Housing Services, Blue Hills Community Services, Swope Community Builders and the Westside Housing Organization. Those groups sub-contract with the city’s Economic Development Corporation.
Mark Stalsworth, president and CEO of Neighborhood Housing Services, said the program is self-perpetuating, because proceeds from the sales of the homes – minus real estate commissions – are funneled back into the program to purchase more homes.
“Of the 15 properties we purchased, we were able to return $1.2 million to the program fund,” Stalsworth said.
There’s a time limit on the money, however: any funds associated with the program – including the reinvested funds – have to be spent by 2013.
The benefit to the neighborhoods is obvious, Sharp said, in that it takes vacant, foreclosed homes and puts owner-occupiers into them. This helps property values of neighboring homes, he said, not to mention the fact that it’s better to have someone living in a house than not.
Sharp said it’s important to realize how thoroughly the homes are rehabilitated. He said all of the homes get energy efficient appliances and other amenities, as well as any necessary repairs to the home’s electrical, plumbing, heating and cooling, and other systems, as well as paint, roof work, and so on.
“These aren’t just cosmetic fixes,” Sharp said. “These homes represent some of the best values on the market for homebuyers who plan to live in their new homes for a long time.
The fact that the homes are completely inspected and brought up to the federal government’s relatively high standards is one of the major benefits to the homebuyer, Stalsworth said.
“Anyone can go buy a foreclosed property, but it’s a buyer beware type of situation,” he explained. “These properties have been intensely inspected and all of the issues have already been addressed, fixed, and paid for, whether it’s the furnace or roof or some other issue – and there’s a two-year homebuyers warranty on the rehab work.”
The prices on the homes are also much better than one would find on the open market.
“The buyer pays the lesser of the total cost of acquisition and rehab, or the appraised value of the property,” Stalsworth said.
But that’s not all. Grant money actually helps reduce the price.
“A really big incentive to the homebuyer is that they get a grant for 20 percent of the seals price to help with that down payment,” Stalsworth said. “So you’re only financing 80 percent of it. That’s significantly better (than purchasing a home normally).”
Of course, potential buyers do need to jump through a few hoops to qualify. Specifically, they must attend eight hours of homebuyer education – that’s a federal requirement.
“People may not like the sound of going to school, but folks who go through that program are 20 times less likely to end up in foreclosure themselves,” Stalsworth said. “So we’re less likely to repeat that cycle of foreclosure of the same property.”
The class also provides continuing support in the way of counselors in case a buyer who goes through the program hits hard times.
“This way, you do have resources if something goes wrong,” Stalsworth said. “It’s all really well thought-out. It’s a very smooth program.”
The easiest way for a potential buyer to get the ball rolling is to complete a homebuyer profile online at www.nspkc.org, or call Catherine Singleton at the Economic Development Council at 816-691-2139.
“This really is a big deal,” Sharp said. “This is great news for our corner of the city.”
Posted by Jackson County Advocate at 2:32 PM