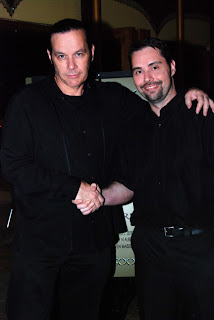 By Seann McAnally
Grandview’s Jeff Albert wants to change the way Hollywood thinks.
How does he plan to do that? Bring them to Kansas City.
Albert says his film Hope Lost has secured a distribution deal with Metropolitan, Inc., a company that works with such film studios as Paramount, Universal, and Lion’s Gate, for nationwide theatrical release on at least 2,000 screens and in about 50 foreign countries.
“That’s a huge step for us,” Albert said. “The vast majority of films don’t have distribution deals before they’re even shot. This isn’t an independent film, this is a full studio production.”
Albert, a 1991 graduate of Grandview High School, wrote Hope Lost as a springboard for other, more expensive projects he wants to do someday – namely, to film his fantasy novel Blade Master, part of a larger epic of his imaginary world of Kohr.
“Those movies were going to cost something like $100 million,” Albert said. “No one was going to trust me with that kind of money.”
So he wrote Hope Lost to be a sure-fire Hollywood hit.
Producers Marlon Parry (Road Dogz, Karla, Senior Skip Day) and Bill Davis (Garden State, Saw and Scary Movie 4) have raised funding for the film, and are currently working with Brillstien Entertainment to attach a slew of name actors to the project, including Josh Holloway and Evangeline Lilly (Sawyer and Kate from the TV show Lost), Sean Astin of the Lord of the Rings and Goonies, Larenz Tate, Steven Root, and Tiffani Thiessen. These actors have all signed letters of intent to appear in the film.
Albert plans to bring Hollywood home when the movie starts shooing – all of the principal photography is expected to be done in Kansas City and Lee’s Summit.
“This is really a test tube for the Kansas City area. I told the producers I could make a feature in Kansas City much cheaper than in Hollywood, and they challenged me to show that. So I got some local investors together, which was enough to move forward and keep the project alive. It just kept getting bigger and bigger.”
If all goes according to plan – which is a big if in Hollywood, Albert cautions – the film may be shooting in Kansas City in March, with a theatrical release as early as this winter.
Albert attributes Hollywood’s interest in Hope Lost to one simple fact: it’s a sure-fire commercial formula.
“I wrote this film to make money,” he explained. “That’s not to say I don’t love the story, but this is a formula I knew would work. It has elements of action, sci-fi, comedy, romance and drama.”
The film is about Joe Baker, a computer security tech who dreams of finding a special someone. But he gets more than he bargained for when he meets Hope, a woman who has the secret to eternal youth and enhanced perception. But after her untimely death, Joe gets drawn into a secret war for wealth and power, uncovering a conspiracy involving immortal beings.
Albert said he is most excited about the opportunity to showcase some local Kansas City talent when Hollywood comes calling. Local actors Katrina Voloinno and Joshua Peterson are attached to the project, as are local musician Rehtaeh and composer Will Puckett.
A Kansas City company called Box of Chalk, run by local men Mark Valentine and Steve Schilling, are working on product placement deals for the film, which Albert says will pay for most of the production costs, excluding actor and crew salaries.
It may not be surprising for Midwesterners to learn that Hollywood wasn’t all that crazy about shooting in KC.
“They were, like, ‘Kansas City?’ There’s nothing there to shoot.’ They thought we’d have to be pushing cows out the way or something. But we’re not a bunch of cowboys here. People in Hollywood have such a misconception about Kansas City and I want to break that.”
He said he has been occasionally frustrated by how long the process of shooting the movie will take.
“We’ve been working on this for two years,” he said. “It’s been a lot of ‘hurry up and wait.’ But there are a lot of films that take five, even 10 years to get off the ground, so we’re actually on a pretty good schedule.”
Despite several roadblocks having to do with making films, he never felt like he could just “give up.”
“This is my one chance to show Hollywood what we can do here in Kansas City,” Albert said.
Posted by Jackson County Advocate at 11:25 AM