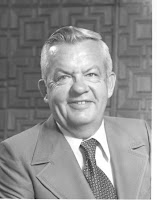 Laroy S. Gann, 82, Grandview, MO, passed away peacefully surrounded by his devoted wife of 52 years & his loving family on Tuesday, June 21, 2011 at St. Joseph Medical Center.  Memorial Visitation was  1-3 PM Saturday, June 25th at McGilley & George Funeral Home, 12913 Grandview Rd., Grandview, MO.  Family requests you come casually dressed.  Contributions to the Grandview Historical Society.
Laroy was born October 27, 1928, in Gans, Oklahoma to Floyd & Opal (Anglen) Gann.  He married Lois (Niebergall) Gann on May 16, 1959 and they immediately made their home in Grandview, where they lovingly raised their three children.  Prior to their retirement in 1994, Laroy and Lois owned and operated Barry-Gann Lumber Co. in Kansas City, MO.  He was an avid hunter and fisherman, and treasured the time he spent hunting with his son, Mark, and fishing with his wife, Lois, at their family farm in Cleveland, MO.  Reading anything he could get his hands on was also a favorite pastime, as well as spending time with his cherished children and grandchildren that he was so proud of.  Laroy never met a stranger, loved telling stories and jokes, and treasured his morning coffee time at McDonald's in Grandview, where he developed many special friendships.
Laroy's survivors include his loving wife, Lois Gann of the home; daughter and son-in-law, Tonya and Sam Buccero and grandchildren, Sammy and Alesha of Lee's Summit, MO; daughter and son-in-law, Pam and Steve Hinderliter and grandchildren, Ryan and Hillary of Overland Park, KS; and son, Mark Gann of Cleveland, MO.  He was preceded in death by his parents and sister, Shirley Henderson.  We have lost a wonderful husband, an incredible father, a very special grandpa and a dear friend to many, and he will be greatly missed by everyone who knew him and loved him.
Condolences may be made at www.mcgilleygeorgegrandview.com
Posted by Jackson County Advocate at 12:16 PM