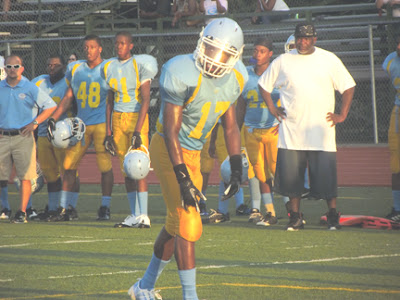 GHS Bulldogs prepare for football season
By Paul Thompson
Bulldog Pride is back in Grandview.
Last year, players noticed the culture at Grandview changing for the better. Head coach Andy Leech and the entire 2010 senior class can be attributed for instilling a sense of work ethic and camaraderie in the team. But a 2-8 overall record and a 0-4 mark in the Suburban Blue Conference proved that the results on the field didn’t match up with the team’s high standards.
“The record hasn’t always shown what is really on the team,” said offensive tackle Akil Williams. “Last year I felt like we created this foundation, the seniors we had last year they created this bulldog football team, Bulldog Pride is what we call it. A bulldog is going to fight back. We may have been down but we sure weren’t going to quit.”
It’s that never-say-die mentality that Grandview will be counting on to turn a winning attitude into a winning football team. Williams is one of several players who will symbolize that bulldog mentality by playing on both offense and defense this season.  Aside from his role on the offensive line, Williams figures to get time at defensive tackle as well.
“It’s new, but I’m always comfortable with it at the same time,” said Williams. “I do think it makes me a better player.”
Another player who is being counted on is senior wide receiver Jaron Alexander. Alexander played a couple of games at cornerback last year, and will be expected to increase his snaps at that position this season. It is a challenge that he embraces with open arms.
“I’m a better receiver, because I work on it more, but I still feel very comfortable at corner,” says Alexander about how he’s handling the increased workload. “On the other side, the people I work with every day, the receivers, they really come at me.”
Alexander, the team’s top returning receiver, says that the senior class is taking steps to ensure that the team atmosphere created in the last couple of season carries over this year. Being willing to play on both sides of the ball is a way for him to show his teammates the kind of work ethic they will need to be successful. When asked how many snaps he would play in games if it were his decision, Alexander is quick to respond: “100%”.
“Last year, they started the culture around here to change and get things back to where they need to be,” Alexander continued. “Now, me and the other seniors around, are going to pick it up where they left off and just make sure all the young people know that we’re here to work hard and build a good program.”
Perhaps no Bulldog has sacrificed as much for the team as fellow senior and two-way player Zane Moore. Moore, a tight end and defensive end, was ineligible to play varsity football last season after he transferred to Grandview High School following his first two years at Lincoln Prep. Moore was ineligible because he was not a Grandview resident yet during last season. With that said, the player that head coach Andy Leech has called “one of the most talented kids that we’ve ever had” didn’t let the frustrations of being relegated to JV keep him from buying in to the bulldog mentality. In fact, Moore took the year away from varsity as an opportunity to shore up his game.
“I played tight end my sophomore year, and I also played defensive end,” says the 6’1”, 205 pound Moore. “I feel that it’s helpful to have played there (Lincoln Prep) and if anything to have sat my junior all I did was mold my talent.”
Despite being restricted to JV last year, Moore was allowed to practice with the varsity team. After a year and change spent practicing with the Bulldogs, Moore thinks that the team compares favorably to his old team at Lincoln Prep. He’s just happy to be a part of it after a year removed from varsity competition.
“I’ll say that this is a better all-around team without a doubt,” Moore raves about his new team. “Our o-line is fantastic. They were all sophomores playing varsity last year. We have a plethora of running backs. I’m not sure if they’ll ever get tired. Our d-line is amazing; we have too many good players, if that’s even possible.  I think it’s a great team with great depth.”
Moore is also happy to be catching passes from talented junior quarterback Ryan Lee, who he calls “intelligent and a great player”. Head coach Andy Leech thinks that those two, along with Alexander, can form a dynamic core to the Grandview offense.
“He’s got to be one of the best in the city,” Leech says of Lee. “I’ve seen a lot of good quarterbacks and I’ll put him right up there with the best we’ve had.”
Moore and Leech’s optimism is shared by the other two-way players as well. With the depth that he describes, both Alexander and Williams feel comfortable that the team won’t lose much when they are off the field.
“We have depth, so if somebody has to come off the field we always have somebody that can go back in and the intensity will still be there,” says Alexander. With the talent that and the pride that the Bulldogs will bring on the field this year, Alexander feels that Grandview only has to beat themselves to be successful.
“We can go all the way,” he says. “That’s the way I truly feel. I truly feel that we can go as far as we want to go.”
Posted by Jackson County Advocate at 12:33 PM