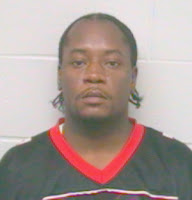 A Grandview man has been charged with the forcible rape and choking of a woman at the Candlelight Apartment complex this week.
Police were called to the apartments at approximately 10:30pm on Sunday. When they arrived, a man met police and told them that around 9:30pm he was walking over to a friend and neighbor’s apartment when he was passed by a man named Robert Henderson.
According to police documents, Henderson told the man, “Your friend isn’t breathing.”
The man told police he then ran upstairs to his friend’s apartment, and found her partially naked on a futon. She was not breathing. He performed CPR on her, and she began gasping for air. Once concious, she could not remember what had happened to her.
The woman told police that she had invited Henderson over to hang out. When he arrived, she said he smelled like he had been “doing wet”--a drug made of marijuana, sometimes PCP, and formaldehyde. She told police that she told Henderson that he stunk, so he choked her until she passed out.
The victim was transported to Research Hospital, where a nurse recorded injuries to her breast and other areas, along with signs of rape. In addition, the woman had bruising around her neck and pain in her head, along with a broken blood vessel in her eye, which the nurse concluded could be due to the victim being strangled.
Grandview Police found Henderson, age 33, outside of his grandparents house at Craig and Fuller. He approached police, exclaiming that he “did not rape” the victim.
Henderson told police that the victim got upset with him when he accidentally broke a light in her house, so she “faked” not breathing.
Jackson County Prosecutor Jean Peters Baker announced Monday the filing of a Forcible Rape charge against Henderson. A criminal history check showed he has 18 felony arrests and five felony convictions.
Prosecutors have requested a $250,000 cash-only bond.
Posted by Jackson County Advocate at 1:02 PM