By Paul Thompson • Photos by Seann McAnally
UPDATE: Grandview firefighters were called this morning to investigate an unknown odor at the Center for Alternative Instructional Resources (C.A.I.R.) school building located at 1001 Main and soon discovered that several people were complaining of being sick.  A special fire department meter did not indicate the presence of any dangerous chemicals, but the building was evacuated and a hazmat team from the Kansas City Fire Department was requested in addition to representatives from the gas company.  Three out of fifteen people evaluated by paramedics (one adult and two teenagers) were transported to local hospitals for observation by ambulances including units from Belton and Kansas City.  The sophisticated testing equipment used by both the hazmat team and gas company also failed to sense the presence of anything dangerous.  As an added precaution, the team took an air sample back to their chemist in Kansas City for analysis that resulted in a finding of 12 parts per billion for a combination of floor wax, cleaning solvents and copy machine toner.  According to a member of this same team of firefighters, such a reading is typical for most office buildings throughout the United States.  With no dangerous conditions found, the building was deemed safe and capable of reopening for school tomorrow morning.

As it happened...
Three people were taken to the hospital and a building was evacuated after a suspicious odor hit a Grandview C-4 school district building today, but fire officials are still investigating the cause.

Fire trucks, ambulances, and police cars from Grandview and Kansas City were dispatched to the Center for Alternative Instructional Resources (CAIR) after staff reported a suspicious odor inside the building at approximately 12:15 p.m. Students and staff were immediately evacuated outside the building, and eventually moved to Conn-West Elementary while fire department personnel inspected the building.
Eleven people were tested for their symptoms, and three were ultimately taken to the hospital as a precautionary measure. One staff member and two kids were taken away by emergency vehicles.

Fire officials did not find any known dangerous gasses in the air inside the building, but are still conducting air quality tests.

"The Fire Marshall took an air quality test and they're taking it to the lab right now," said Lane Lucas, a district spokesman, at about 2:15 p.m. "We should know the results in an hour or two. That's the final thing we're waiting to make sure we can have school tomorrow, which we anticipate we can." 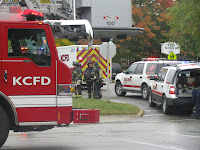 The Kansas City Fire Department assisted at the scene with HAZ-MAT specialists. According to C-4 superintendant Dr. Ralph Teran, the KCFD was using more advanced equipment to inspect the leak to get down to the bottom of the problem.

"It's kind of puzzling right now," Lucas said. "There was an odor but officials found no gas."
Posted by Jackson County Advocate at 1:10 PM