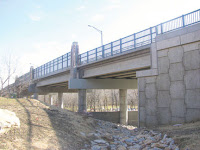 When local leaders cut the ribbon on the new Red Bridge last Friday, they took a further step in a historic odyssey of pioneering transportation improvements that started in the early 1800s, when covered wagons first rolled through South Kansas City as part of  the western expansion of the United States.
The new $14 million bridge, which had some $4 million in federal funds, replaces the decades-old covered bridge on Red Bridge Road with a new, two-lane structure with sidewalks and a multi-use trail.
“As I drive over this bridge in my hybrid electric car, I’m going to be marveling at all the covered wagons that came through this area,” said David Jackson, director of archives and education for the Jackson County Historical Society.
Jackson recounted the history of the region, from its early days as a trading post to a key gathering spot on the Santa Fe trail. Would-be settlers on their way to New Mexico gouged deep ruts in the landscape – those swales can still be seen in Minor Park, within view of the new Red Bridge. The Blue River was the first major obstacle on the trail, and in 1859 a 100-foot long covered bridge was built. Someone painted it red, Jackson said, and the name has survived to this day. The bridge was replaced with steel in 1914, and again in the 1930s.
In the year 2000, as traffic volumes and population grew in the area, city officials began to talk seriously about replacing the Depression-era bridge, starting a plan that came to fruition on Friday.
“To be honest I didn’t think we’d ever be standing here,” said Patrick Klein, director of capital improvements.
While the bridge was open for traffic on Friday, there is still more to be done – including one of the key features of the bridge: lighted monument plaques that celebrate 10 influential historical figures that pioneered settlement in the Red Bridge area. Still to be installed are a series of red LED lights that will light up at night to carry on the tradition of having a “red” bridge.
The old Red Bridge, pictured below, will remain a part of the area’s history, Klein said, as it will be incorporated into bike and walking trails.
“The old bridge will remain for pedestrian use,” Klein said.
Councilman John Sharp said it was important to remember the core focus of the entire project – to improve public safety. He said the bridge saves commuters two or three minutes when trains pass – and those minutes could be vital.
“Two to three minutes may not mean much if you’re just driving home from work, but if you’re the one waiting for an ambulance to get to your home, if you’re the one waiting for a fire truck to get to your home, if you’re the one waiting for a police car to get to your home, those two to three minutes could mean the difference between life or death,” Sharp said. “That’s what this project is – a public safety enhancement.”
Sharp said he couldn’t wait for the lights and artwork to be installed.
“I think it’s a beautiful bridge now, but it’s going to be a lot more beautiful,” he said.
The bridge features several look-out points where pedestrians can stop and take in a scenic view of the [river] valley, Sharp said, and historical plaques will tell the pioneer history of the area.
“It will be an educational destination,” Sharp said. “Unlike a lot of monuments, it will be one that will reflect the ethnic and gender diversity of the pioneers of this area.”
Councilman Scott Taylor said the bridge was key to the future of South Kansas City, and that the associated pedestrian and bicycle paths could draw new people to the area.
“This Red Bridge is so important in our district that it can’t be understated,” Taylor said. “It’s not only an improvement for commuters but for joggers and bikers. As we attract new families to Kansas City, this is one of the amenities that families are looking for.”
Taylor passed the microphone to his wife, former Councilwoman Cathy Jolly, who was a champion of the project during her time in office.
“Cathy put her heart and soul into this bridge,” Taylor said.
Jolly acknowledged that throughout the planning and design process, there were some residents who didn’t like the direction it was going. They felt it destroyed the rural character of their neighborhoods. But many others were enthusiastic about the need for a new bridge, Jolly said.
“It’s fair to say this bridge was controversial,” Jolly said.
Klein agreed, and spoke of numerous public meetings about the issue, some of which were occasionally contentious.
“This bridge has had more public input than any bridge in the city, trust me,” Klein said.
Jolly said the fact that the bridge opened, however, speaks to the forces that pull the communities of South Kansas City together.
“It took a lot of commitment and a lot of compromise to get to this point,” she said. “We’re a close community and we have a lot to celebrate.”
She had a message for the current elected officials:
“Keep at it. Make sure our funding stays in place,” Jolly said. “Make sure that artwork gets up, because that’s what makes the bridge ours.”
Sharp joined Taylor in praising Jolly for her work on the bridge, along with former council members Alvin Brooks and Chuck Eddy, who initially got the ball rolling on the new bridge.
“I remember the first meeting about this in February 2000,” Sharp said. “We’ve come a long way since then.”
Posted by Jackson County Advocate at 12:13 PM