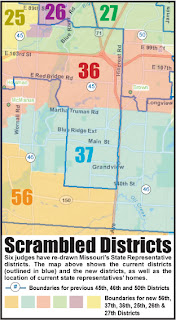 By Andrea Wood
Missouri’s state representative districts have been radically redrawn, and the new map completely changes the game for Grandview and South Kansas City.
Six judges were appointed by the state Supreme Court to draw the Missouri General Assembly’s new district boundaries after two bipartisan citizen commissions could not reach agreement.The maps were drawn in secret, with the judges refusing to post public meeting notices.  In accordance with the state constitution, each district needed to contain roughly the same number of people, according to the 2010 census.
The new map was released on November 30th. More than one-third of Missouri’s House incumbents will now be in districts with one or more fellow members.
Among them are local State Representatives Jason Holsman and Kevin McManus.
Holsman, who represents the existing 45th District (South KC and Grandview west of 71 Highway), and McManus, who represents the 46th District (South KC, Martin City and Grandview east of 71 Highway), were redrawn into the same district.
Both now live in 36th District. The new 36th District covers a swath of South Kansas City just north of Grandview (but not including Grandview),
Another portion of the 50th District has been joined with a chunk of the former 45th District to create a new 27th District.
Martin City will be lumped with a portion of Belton in the new 56th District.
Meanwhile, Grandview was once split at 71 Highway between the 45th and 46th Districts. Now, the entire city will be in the 37th District.
In the aftermath of these changes, Democratic Party leaders in South Kansas City and Grandview came together to discuss the options available for the 2012 primary and general election.
Under the Missouri Constitution, when new legislative districts are created less than one year prior to the next general election, as is the case with the new House map, the usual residency rules are relaxed and candidates have some ability to run in districts that they don’t currently live in. They would have to move into that district a year before the 2014 elections in order to seek re-election that year, however.
As a result, Holsman has decided to seek re-election in the 37th District, which includes all of Grandview and portion of South KC. The Holsman family owns a horse ranch, Holsman Stables, in the middle of the new 37th. Holsman grew up in Grandview, living on Park Hills Drive and attended Meadowmere elementary.
“Having represented voters on the west side of 71 highway for the past five years, I’m excited to get to know the voters on the east side where I spent my childhood growing up,” Holsman said, “Nothing changes for me in the legislature because I have been working hard for the entire city of Grandview since I was first elected in 2006.”
McManus has declared his candidacy in the newly created 36th District. It encompasses a large portion of Holsman’s former 45th District, as well as a portion of the former 50th District, currently represented by State Rep Michael Brown.
“I will be running for re-election in my home district, the newly designated 36th District,” McManus stated on Friday. “Jason has provided strong representation for part of the new 36th District for the past six years. I look forward to continue working with Rep. Holsman in the legislature as he launches his own re-election campaign to represent the newly created 37th District.”
Hickman Mills School Board President Bonnaye Mims will run for the State Representative seat in the 27th District, which includes portions of the former 45th and 50th Districts.
“I’m pleased to announce my candidacy in the 27th District, which is an open seat,” Mims said. “I’ve worked hard as a public servant with the school district, and I look forward to serving our area in Jefferson City.”
Children’s Advocate Jeremy Lafaver has declared in the 25th District.
The new maps also re-draw the districts for the State Senate seats. Generally, South Kansas City has been divided into districts 9 and 10. That remains the case, although the exact boundaries have changed. Most of Grandview will remain in State Senate District 10.
Posted by Jackson County Advocate at 5:05 PM