Jackson County Advocate owner & editor Andrea Wood reflects on moments of synchronicity during her 10 years with the newspaper, announces new ownership that will proudly continue the tradition of our hometown newspaper being family owned and operated by those who also call this area “home.” 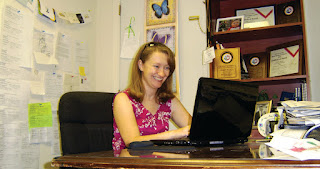 If you’d like to contact me, I can be reached at andreanote@aol.com.
Posted by Jackson County Advocate at 1:45 PM No comments:

The City of Kansas City, Mo., Health Department has expanded clinic hours to meet the increasing demand for back-to-school immunizations. No appointments are necessary. Participants should plan to arrive early. The change in time only applies to the childhood immunization clinic.
To accommodate the large number of children seeking immunizations, the clinic schedule has expanded to include lunch hours on most days. Clinic registration is Mondays, Tuesdays, Wednesdays and Fridays from 8 a.m. to 3:30 p.m. and Thursdays from 8 a.m. to 12:30 p.m. for the remainder of the back-to-school immunization rush. Children registered during those times will be seen the same day. There will also be a Saturday Clinic on Aug. 11 from 9 a.m. to 2 p.m.
“Although parents can get their child’s back-to-school immunizations anytime in the summer, we always see a rush as the first day of school nears,” said Ron Griffin, division manager, Communicable Disease Prevention and Public Health Preparedness. “We encourage parents to make sure their child is current with their immunizations before they get to the first day of school as many schools will not admit them without updated vaccinations or a religious waiver.”

Immunizations are free for children who have no insurance, who have limited insurance that does not cover immunization or who are eligible for Medicaid’s Vaccine For Children program.

Following Tuesday's election, some races are over, while others are just beginning.
The primary sets in place candidates from each party who will be facing off in November. In Jackson County, however, there were a number of races in which no Republican had filed. The primary election took on extra importance then for the following seats and their winners:
• Jackson County Sheriff - Mike Sharp
• State Senate - Jason Holsman (7th District) and Kiki Curls (9th District)
• State Rep.- Bonnaye Mims (27th District), and Kevin McManus (36th District)
A contentious race between three Democratic candidates for State Representative in the 37th District-Joe Runions, Chris Moreno and Mike Sager-has resulted in Grandview Alderman Joe Runions facing Republican Nola Wood for the seat in November.
Republican Jacob Turk won a four-way battle to once again challenge Emanuel Cleaver for the U.S. Representative seat in the 5th District.
In the race for a U.S. Senator seat, Claire McCaskill (D) will face Todd Akin (R) in November.
Some of the state-wide races that have lined up for November for the Democrats and Republicans are as follows:
• Governor - Jay Nixon (D) will face Dave Spence (R)
• Lt. Governor - Susan Montee (D) will face Peter Kinder (R).
A Missouri Constitutional Amendment generally nicknamed the "Right to Pray" was overwhelmingly approved.
And Kansas City voters approved two questions on their ballot as well. Question 1 will raise KCMO's sales tax by 1/2 cent, but replace other taxes and fees, in order to fund the maintenance and operation of Kansas City's many parks, parkways, boulevards, and community centers.
Question 2, also approved by voters, allows KCMO to authorize $500 million in revenue bonds to upgrade the sanitary sewer system, as mandated by the federal government, to reduce overflows of combined sewage and storm water.
Posted by Jackson County Advocate at 9:17 AM No comments: