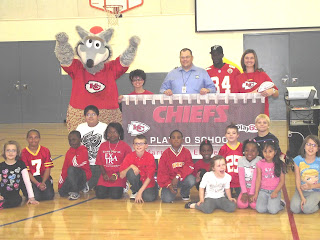 Kansas City Chiefs wide receiver Jamar Newsome (#84) stopped by Martin City K-8 last week to take part in the popular Play 60 Program at the school. Newsome showed Martin City students how to run agility drills, and then coached selected students as they competed in lateral drills, hiking and catching practice, and even a trivia competition against Kansas City’s own KC Wolf. KC Wolf drew a raucous ovation as he entered the Martin City gym, and remained a crowd favorite after the program as he hung around to sign autographs for eager students. Newsome thanked the Martin City students for all of their hard work, and presented a Chiefs game ball to the school as a token of their great work.
“This ball is symbolic because it stands for excellence,” said Newsome to the students. “The Chiefs would like to present a game ball to Martin City for their excellence.”
Newsome also earned some instant karma for his visit to Martin City, as he was activated to the Chiefs active roster and recorded a catch in last week’s 17-9 loss to the Denver Broncos.

Posted by Jackson County Advocate at 10:44 AM No comments:

SKC Man Charged With Murder Made to Look Like Suicide

By Mary Wilson
Twenty-three-year-old Micah Moore of South Kansas City was charged Saturday with first-degree murder in the death of twenty-seven-year-old Bethany Deaton of Grandview.
Deaton’s body was found on October 30 at Longview Lake. A c c o r d i n g to the Probable Cause Statement, Jackson Count Sheriff’s Deputies were dispatched to a Longview Lake shelter house on a reported dead body. Once there, deputies found a tan-colored van in the parking lot with a body slumped over in the rear seat. The body appeared to be that of a white female with a white trash bag over her head.
A notepad was also inside the vehicle, with an apparent suicide letter, along with over-the-counter medication. Deaton’s photo identification for Menorah Hospital, where she was a nurse, was also found on the floor of the vehicle. There were several International House of Prayer CD’s on the front seat.
On November 9, ten days after Deaton’s body was discovered, Moore responded to the Grandview Police Department and made statements about being involved with the death of Deaton.
According to court records, while being interviewed Moore stated, “I killed her.” Moore said he killed Deaton because she and her husband, Tyler Deaton, had shared a residence with Moore and several other
males, where they had sexually assaulted her for several months. According to Moore, Deaton had been seeing a therapist and they were afraid that she was going to tell her therapist about the assaults.
Moore admitted to being at Longview Lake with Deaton and said he “…placed a bag over her head and
held it there until her body shook.”
The court records also state that Moore said someone (the name of whom is blacked out) told him to kill Deaton, saying they knew Moore had it in him to do it. Moor told detectives that Deaton had been given
Seroquel, a prescription anti-psychotic, and mentioned it being given to her during the sexual assaults and in a water bottle the day of her murder.
Detectives interviewed International House of Prayer Pastor Shelly Hundley, who stated that she had talked with Moore at the Grandview Police Department and he admitted to the sexual assaults, saying they were video recorded on Moore’s iPad. Moore also stated there were poems, which the assailants wrote about the assaults, on his iPad.
Detectives also interviewed several other roommates of the Deatons. One, who said he was a roommate and member of his church and religious community, said he had been in a secret ongoing sexual relationship, which Tyler Deaton claimed was to “discover his masculinity.”
Another roommate stated that he had not been in the “community” as long as everyone else. This person had come into contact with Tyler Deaton at Southwestern College and moved to Kansas City to become part of the community after graduation. He advised that Tyler Deaton was the leader of the community, and that he felt he was groomed to fit into the group of men. He recalled,according to court records, one time that he was lying in bed and Tyler had laid next to him and held him, and stated that he realized now that Tyler was attempting to make him a member of their sexual group.
Another roommate describes Tyler Deaton as “controlling and manipulative”, and said that the sexual activity that went on in the house was part of a “religious experience.”
The final roommate interviewed stated he had been involved in a long-term sexual relationship with Deaton. He said he and Deaton’s sexual relationship had been in secret, but he knew of other male roommates also involved with Deaton. He explained that Tyler Deaton was viewed as a “spiritual leader” that had control over the members of the household. He also said he believes that members of the household would lie for Deaton so he could remain the leader of the group.
According to court records, Deaton’s behavior the weeks prior to his wife’s death was “angry and frustrated.” Deaton told him that he had a dream that he had killed his wife by suffocating her.
Prosecutors requested a bond of $500,000 and said there could be more charges coming in the case.
Posted by Jackson County Advocate at 1:20 PM No comments:

By Mary Wilson
Some Grandview community members are speaking out against the Grandview CSD-4 School District and requesting signatures for a state audit.
The petition is asking for registered voters in the Grandview C-4 School District to consider signing for a state audit to potentially uncover over $200,000 that was written off by the district’s auditors, as well as raising some questions in regards to the turf installation and MAP scores.
“I think it is important that the school district keeps close track of the patron’s money in this district,” said former school board member Donald Fisher.
The school district underwent a state audit at year-end in June of 2004. At that time, the state auditors found no material weaknesses and no misuse of funds. The 2004 audit was the result of a petition at that time, as well.
“That audit cost the district just under $20,000, not including staff involvement,” said Ann Marie Cook, Assistant Superintendent of Finance & Operations for the district. “We are now working with a completely different set of people than who were here in 2004.”
For the 2011 fiscal year, the Board of Education approved DSWA to audit the district’s financials. While the audit was clean, DSWA did identify some material weakness. This could have been a deficiency in internal controls, or a possibility of a misstatement of funds.
“We were not doing complete monthly bank reconciliations for all of our accounts,” said Cook. “All of that was reconciled by the time it went before the board for approval.”
As part of the 2011 audit, DSWA did find and report a $221,524 prior adjustment, and brought that to the district’s attention. However, per the scope of the audit that was being performed, DSWA did not go in and identify what exactly that money was as part of their regular audit work.
DSWA was then separately contracted out to further investigate the un-accounted for funds. After the September, 2012 board meeting, Advocate staff reported that the school district’s current process for handling outstanding checks at the end of the year, as well as outstanding transactions after year-end processes, were what was creating the problem. There were no missing funds as a result of the material weakness.
“DSWA made recommendations to us that we needed to change our monthly processes and make improvements as needed, and we’ve done that,” said Cook.
“I would like somebody else besides DSWA to look at it,” said Fisher. “I stated that at the board meeting, and I was turned down.”
According to district officials, the request for an outside audit was on board agenda in Februrary, 2012. At that meeting, it was decided to add the item to the March workshop. At that time, DSWA came out and presented to the school board.
“After their presentation to the board, there was a time for questions, comments or concerns,” said Board Secretary Kathy Meyers. “There were no comments made at that time. The board did not direct or deny moving forward with another agency.”
Those behind the petition feel that there needs to be a more in-depth audit. On whether or not Fisher hopes to uncover that $221,000 with a state audit, he said, “basically, and also to see if there are any other problems.”
Another issue is the fact that the district had $1,000,000 of bond money left over and decided to use it to install artificial turf on the GHS football field. According to petitioners, the school district chose to forego a potential $200,000 NFL grant to help defray the cost of the project.
The bond project was originally for piping work to be done at Grandview Middle School. Phase one of the project was to replace the central core piping. After that work was completed, the workers replacing pipes noted that the piping in the “pods” of the school were not as deteriorated as they originally thought. At that time, the school district hired an independent company to test the pipes as well as a separate independent company to analyze the pipes. This determined that the piping did not need to be completely replaced and could be repaired, which then caused a significant reduction in the scope of the work as well as a significant reduction in the cost.
“I think it’s important that the school district keeps close track of the patron’s money in this district,” said Fisher. “The people that I’ve talked to are not happy with the way that the district was being run. They do not like the football field. They thought that the money could be better spent elsewhere.”
The district then held several open community input meetings, and ultimately the turf installation passed in a board vote of 4-3.
“Grant proposals for the NFL grant were due last December,” said Cook. “We were too late for that. If we waited another year, there was no guarantee that we would receive the grant. Because of this, the board of education decided to move forward with the project.”
In order for the state of Missouri to approve an audit of the Grandview school district’s finances, the petition must garner 1500 signatures.
“We’re right about halfway there,” said Fisher.
According to the school district, the implications of a state audit would be more than just the cost to the district.
“I imagine the cost of the audit would be similar to what it was in 2004, which was right around $20,000,” said Cook. “We would also be considering how much time our staff would need to devote to the audit. Their plates are full enough as it is, and this would pull them away from their regular work. The audit would also, I believe, cause a distraction or disruption to the district as a whole, especially when we’re trying to focus our efforts on positive things.”
Posted by Jackson County Advocate at 3:42 PM 1 comment: