By Mary Wilson
The City of Grandview hired consultants to perform a feasibility study for aquatic facilities to assist Parks and Recreation with decision making regarding the feasibility of either renovating the existing outdoor Meadowmere swimming pool or building a new outdoor aquatic facility. The consultant team of Confluence, PROS Consulting and Waters Edge Aquatic Design worked closely with city leadership and staff to evaluate the current condition and desired future aquatic programming and facilities. In addition, ETC Institute conducted a community survey to provide insight into the attitude of residents toward the city’s current aquatic facilities.
The City also had the same consultants perform a study regarding the feasibility of renovating the existing outdoor athletic complexes and building a new athletic complex near Meadowmere Park.
At the December 18 Board of Aldermen work session, representatives from Confluence gave a brief overview to give an understanding of the purpose of the studies, which was to determine the outdoor aquatic and athletic field facilities.
According to Terry Berkbuegler of Confluence, the results showed that Grandview should develop aquatic facilities that enhance the quality of life in Grandview. The plans included promoting a community pool with enhanced features to attract more patrons. The final results of the study indicated that it would be financially feasible to operate a new outdoor aquatic facility in Grandview at the Meadowmere Park site, assuming all capital funding required to demolish the existing swimming pool and construct the new facility will come from sources other than operational revenues for the facility.
“The success of a new aquatic facility will depend on how the City programs, prices and operations of the facility work,” said Berkbuegler.
The Board made no final decisions on moving forward with the plans presented, and most members stated their concern that the findings of the study were based on predictions and not based on concrete evidence.
The feasibility study for athletic field facilities indicated that the proposed new athletic complex has the potential to operate at a 58% cost recovery in years one and two of operation and at a 70% cost recovery rate beginning in year three, if programmed and managed according to the assumptions in the study. The recommendation given is to leave the existing facilities, and don’t spend capital to improve what is currently there.
“We think it makes more sense to invest in developing a new facility that meets the desires and needs of the community across from Meadowmere Park,” said Berkbuegler. “The study does not calculate the potential of additional sales and tourism tax dollars that would result from out-of-town users. We spent a day out here this past year meeting with different groups and stake holders in order to get an understanding of their desires or needs. The public input meetings gave good input on athletics, and gave us good insight into what Grandview citizens want.”
The plans included four state-of-the-art baseball diamonds, along with soccer fields. After discussion, the Board asked the consultants to bring further information regarding artificial turf versus lawn turf, and whether or not to go with soccer fields for now, and add baseball later.
“If we can add these soccer fields on this side of the state line, we will be able to hold large regional tournaments right here in Grandview,” said Mayor Steve Dennis. “I don’t know if there are any other field turf soccer fields at all in the KC Metro area on the Missouri side.”
Other board members were in agreement, and ultimately decided that more research needed to be done before they can come to a final decision on how to proceed.
The Mid-America Regional Council (MARC) has asked the City of Grandview to partner with them in the Solar Ready KC initiative. The goal of the challenge is to achieve measurable improvements in the market conditions for rooftop photovoltaics (PV) across the United States, with emphasis on streamlined and standardized permitting and interconnection processes.
The Board approved the partnership with MARC, and has joined the Cities of Kansas City, Lee’s Summit and Olathe.
The Jackson County Health Department approached The View to use the facility as a secondary site in Grandview for dispensing medication or shots to large numbers of the public. Currently, Grandview High School is the primary site, and the federal government is now requiring two sites. The City approved this measure.
Posted by Jackson County Advocate at 10:56 AM No comments:

After weeks of searching, the Hickman Mills school district now appears ready to choose their next permanent superintendent.
The C-1 Board of Education has spent the past month interviewing candidates, and is now wading through their shortlist with an eye on naming a permanent superintendent by December 18. Although he was unready to name names, school board president Breman Anderson Jr. indicated that the board has narrowed their focus in the search.
“Yes, we have made a short list, and there is one that is looking a little bit more favorable than others,” said Anderson last week. “We’ve entered into somewhat of a negotiation.”
The board hopes that an official announcement can be made in time for December’s regular Board of Education meeting, to be held on the night of the 18th. With any luck, the new superintendent can be introduced at the meeting after an official vote is held. The whirlwind search has proceeded with an aggressive timeline, beginning with the announcement naming former Grandview administrator Barbara Tate as interim superintendent in October.
“We put together a very aggressive 90-day, or 120-day schedule. We were on a very aggressive schedule, and it looks like we are going to meet it,” said Anderson. “The only thing that I would have done differently, in hindsight, is I would have started the process much earlier.”
Interim superintendent Barbara Tate, who is expected to remain with the district through the fiscal year (concluding June 30), has been a key figure in the selection process despite not having an official board vote.
“She has been instrumental,” said Anderson of Tate. “Her opinion has weighed heavily during this process.”
Despite the narrow window, Anderson feels confident that the district nonetheless interviewed a strong class of candidates. Now, it looks like the district is only a couple of steps away from wrapping up the search.
“I know that we’re in the final stages of negotiations. I’d say that we’re about 95% through with negotiations,” said Board member Dan Osman. “The five percent that we’re dealing with are some of the most important parts in my mind. I’m of the opinion that we need to have a superintendent that not only can make us academically successful, but is contractually compelled to do so.”
The new superintendent will likely be signed to a three-year contract that will need to be renewed by the board each year. More information will be available as the process unfolds.
“Once the contract is signed and agreed upon by all parties, then more information will become available,” said Anderson.
Posted by Jackson County Advocate at 10:00 AM No comments: 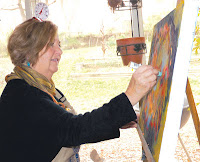 By Becky Davis
Mary Foley Gorman, a local artist in South Kansas City, is currently enjoying a showing at Do’s Deluxe in Lawrence, Kansas. Gorman, a former art teacher, taught for a total of 33 years, 31 of those in the Grandview district, which included 15 years at Grandview’s former East Junior High before moving to Grandview High School. Since retiring in 2003, she has had more time to work on her own creations.
From her home studio,Gorman works in various mediums. The showing in Lawrence is of her highly-manipulated photographs and oil paintings, using bold splashes of bright colors. She has received inspiration from her 10-year-old niece, Emma, making her an angel every Christmas. Each angel is unique, and Gorman has made stained glass, wire, and hand-made paper angels, to name a few. All of Emma’s angels have coppery, curly hair just like their namesake.
Gorman’s warm and cozy home is a reflection of the artist and the works of her friends and family. Artwork is everywhere, and each piece has a story or sentiment attached, including a trio of Italian scenes she painted in watercolor during a trip to Florence, and the oil still life over the mantel painted by her good friend, artist Rod Schuch. From her cheery studio overlooking her woodsy back yard, she has a constant work-in-progress under the careful watch of her rescue companions, lab-mix Margo Joy, and cats Kelly Green and Miss Lydia.
Gorman has had several showings during the past few years, including the Community Christian Church, Unity of Overland Park, a coffee shop on Wornall, and East Market Studios in downtown Kansas City. Her current show at Do’s Deluxe, 416 East 9th Street in Lawrence, opened last week and runs through December 29, 2012.
Posted by Jackson County Advocate at 11:30 AM 2 comments: