Marlin’s Milestone a Time for Reflection

By Paul Thompson
The prospect of his 500th career coaching win had hung around Ruskin head basketball coach Gerry Marlin’s neck for weeks. The anticipation of the moment weighed like an albatross. 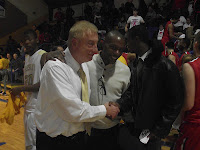