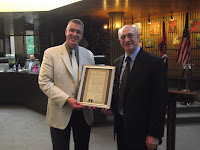 Charles Chancellor has a strong sense of history. He collects coins, and has spent countless hours of his retirement poring over his family’s genealogy, which he’s dated all the way back to 1334. He reminisces with stark clarity the stories from his nearly 60 years in Grandview; recalling names, faces, and many amusing anecdotes about the town in which he’s spent the great majority of his life.

A conversation with Chancellor is a trip in a time machine – his memory is encyclopedic, his enthusiasm infectious. So it seems apt, now in his 75th year, that Chancellor has carved out his own place in history, as Grandview’s 2013 Citizen of the Year.
The retired construction man and 59-year resident of Grandview received the honor at the Tuesday, July 9 regular Board of Aldermen meeting. The board cited Chancellor’s service with the TIF Commission and Planning Commission, the volunteer hours he donated to the Grandview school district (on both the Facilities Committee and Bond Committee, as well as in an unofficial capacity), and his 13 years of service as a Jackson County Election judge among the reasons for choosing Chancellor as their 2013 Citizen of the Year. Although surprised at his selection, Chancellor was nonetheless pleased with the honor.

“I’m sure there are people in Grandview who deserve it more than me, but Becky (Schimmel’s) comment was ‘you were voted in unanimously,’” said Chancellor. “Recognition is the only way you get paid, so you appreciate recognition.”

Chancellor first moved to the city in 1954, when his father relocated the family from Sedalia to find steady work. Chancellor attended Grandview High School, where he served as a 6’2”, 145-pound center on the basketball team. At the time, Chancellor says that Grandview’s football stadium was still located on the west side of 71 Highway, in the location where Grandview’s City Hall now stands. Chancellor is a bridge to a different era.

Even in high school, Chancellor remembers embracing community service. He recalls city officials rounding up athletes on weekends to help string holiday lights along Main Street, with a free meal serving as the carrot at the end of a long day. According to Chancellor, he was always happy to oblige.

In fact, Chancellor has carried on a lifelong love affair with Grandview, and the school district which calls the city home. After marrying his wife Susie on July 11, 1959, the couple had three children. Leigh Ann, Mike, and Dana Sue all attended Grandview High School, just like their father. But their enrollment in the C-4 district was not always a sure thing; Chancellor practically moved mountains to get his children into Grandview schools.

The year was 1970, and Chancellor was actually residing within the Hickman Mills district. At the time, the district was going through a nasty teacher’s strike, and Chancellor was desperate to get his kids into the Grandview district. Alas, Grandview charged a $1,000 tuition fee for each out-of-district student who attended school in the C-4 district.
After doing some investigating, Chancellor found that if he moved into the Grandview district by November 1, he could enroll his oldest daughter, then 5, into kindergarten without paying the sizable tuition fee. So Chancellor quickly bought some property along Botts Road, and went to work on constructing the house he lives in to this day.

“I did not have $1,000 to pay tuition, so we built a house,” said Chancellor with a laugh. “When I say we, I hired my whole family of carpenters to come in and help. We moved in just before the first of November. It wasn’t complete, but we moved in. That’s all the district said we had to do. We probably spent the next year getting everything finished.”

Chancellor refers to himself as a “type-A” personality who always needs to stay busy. While his 34 years in the construction industry kept him plenty occupied during the bulk of his adult life, Chancellor found himself feeling restless as he approached his 1997 retirement. A conversation with former C-4 assistant superintendent Chet Neumann led Chancellor to once again volunteer his time to the school district.
Chancellor jumped at the chance. Before long, he became a key figure in organizing district construction projects, volunteering his time and insight from decades in the industry. Chancellor became such a prominent force in the district, he said, that it almost turned into a problem.

“I had a slight problem, because I was going out in the field to direct what was going to happen,” admitted Chancellor. “I turned into a liability because I wasn’t an employee.”

Although he took a step back after the liability issues emerged, Chancellor has nonetheless remained a key adviser to this day. He simply does what he can to assist the district.

Despite his reduced role, the gregarious Chancellor remains opinionated about the biggest issues facing his district and his city. For the record, Chancellor was in favor of installing the artificial turf at Grandview High School’s football stadium.

“I stood up and told some of those old men, ‘get out and help the school district instead of (complaining) about everything that’s going on,’” said Chancellor.

Furthermore, he believes in the direction that the city is heading in, and the leadership which is directing Grandview.

“I think Grandview’s got a real good future ahead of it,” Chancellor said. “I think we have a lot of good, conscientious people in as aldermen. They’re young and aggressive, and Jim Crain is the backbone of that group. He’s done tremendous things for Grandview.”

Chancellor is at ease talking about his town, and the fond memories he has of it.

“When you get to be 75, the biggest thing you have is your memories,” he said. “I have a good memory, and I enjoy talking about them.”

Invariably, the conversation turns to history. Chancellor is infatuated with his family name, and the history associated with it. He says that a Chancellor family castle still stands in Edinburgh, Scotland, although his family’s rights to it were sold generations ago. The Chancellors, according to detailed research conducted by Charles, first came to America after a relative fled the United Kingdom to avoid a hit on his life. Another Chancellor was a doctor who amputated the arm of southern Civil War general Stonewall Jackson, after Jackson had been accidentally shot by his own troops in a snafu regarding code words as he re-entered southern lines.

Chancellor revels in these stories, enjoys living vicariously through the memories of his ancestors. The nostalgia offers him a moment to reflect on his own life, and his own place in history. With his 2013 Grandview Citizen of the Year award in tow, Chancellor is comfortable with his place on the family genealogy chart.

“I love life. I’ve got a great family, I’ve got enough money to live off; what else could you want? Life is good,” says Chancellor with an exuberance that belies his age. Looking back, he can’t help but smile. “You think I don’t enjoy myself? I have a ball every day.”

Posted by Jackson County Advocate at 11:41 AM