Grandview Roars Back Against Oak Park 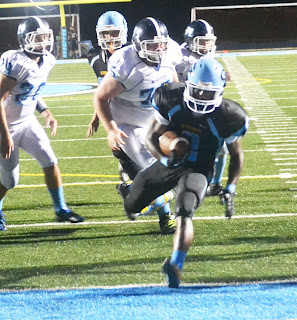 Jerel Alexander scored five touchdowns and rumbled for 302 yards in Grandview’s frenetic 55-40 season-opening victory last Friday night against Oak Park.
In a matchup that Grandview head coach Andy Leech figured would be a defensive showcase, the two teams combined for 95 points and almost 700 yards of offense.
“It totally flipped the script for me. We were going to win 3-0,” said Leech with a smile. “That was the plan. We were going to sit on that defense, and hope to score a couple of times on offense.”
That plan was quickly dashed after Grandview got off to a sluggish start. The Bulldogs received the opening kickoff in the contest, but couldn’t manage a first down in their initial possession. After a wayward punt netted zero yards, Oak Park took over and swiftly punched in the game’s first score.
Following another stalled Grandview drive, Oak Park once again scored a quick touchdown, which was capped off by a long run from running back Marquis Caldwell. With more than five minutes remaining in the first quarter, the Bulldogs had already dug themselves a 14-point deficit.
“It’s the first game, there are first game jitters,” said Leech. “Our kids weren’t disciplined enough to read their keys. We’ve been preparing for it for ten months, and it finally gets here; it’s a little much.”
The Bulldogs, however, finally settled down after Oak Park’s first two scores. Grandview utilized a strong return on the ensuing kickoff from Ryone Winters to help orchestrate the team’s first touchdown drive of the season, culminating in a 22 yard scamper from the aforementioned Alexander. The long touchdown run ignited Grandview’s offense, and instilled a healthy dose of confidence in Grandview’s inexperienced offensive line.
After the game Leech lauded the efforts of his young line, which battled back from the inconsistent start to pave the way for Alexander’s explosive night.
“The offensive line blew me away,” said Leech. “It wasn’t pretty, and they made mistakes, but they made them playing hard. That’s what you want. Hopefully they’ll continue to get better, and continue to make holes for those guys.”
Alexander had similar praise for his blockers following the best performance of his high school career.
“I don’t want to take all the credit,” said Alexander. “Obviously I couldn’t do it without my o-line. They really stepped up. We’ve got a lot of first-year starters, and I just couldn’t do it without them. I have to give a lot of thanks to those big guys up front.”
Those lineman helped give the Bulldogs the lead in the second quarter, when Alexander ripped off touchdown runs of 73 and 79 yards, respectively, to give the Bulldogs a 21-14 lead. But the scoring was not even close to complete.
Oak Park stayed competitive throughout the contest despite not attempting a pass for the entire game. The Northmen utilized a series of disguised runs, from reverses to running back handoffs, to confound the Bulldog defense throughout the game. Oak Park quarterback Malquan Scott set the tone, rushing 11 times for 80 yards on the night, including a 56-yard touchdown run that tied the game with four minutes left in the first half.
Alexander, though, scored his fourth touchdown of the game on a short run from the Wildcat formation before the end of the half, allowing the Bulldogs to go into the break with a 27-21 lead. Alexander said that the Wildcat had just been added to the team’s repertoire before the opener.

“We actually just put that in two weeks ago, just to kind of throw off the defense,” said Alexander. “I’m following the other tailback, which is (Jaavon Turner), through the hole. It was working at practice, so we tried it in a game.”

Although Grandview was ultimately able to pull away in the second half, that doesn’t mean that things were easy. Oak Park continued to punch holes in the Bulldog defense, taking advantage of Grandview’s aggressiveness. The Bulldogs incurred more than a dozen penalties in the game, including a half-dozen encroachment penalties and several costly personal fouls. After the game, Leech was not happy with his team’s undisciplined play.


Grandview managed to put the game away with a series of quick scores beginning late in the third quarter. Alexander scored his fifth and final touchdown on a 35-yard run with two minutes left in the third, before Ryone Winters returned a kickoff for a touchdown that put the Bulldogs up for good. Quarterback Darrian Aldridge sealed the deal late in the fourth quarter with a 9-yard touchdown run, and Grandview’s defense put an ironic exclamation point on the victory by returning a fumble for a touchdown in the closing seconds to finish off the 15-point win.
The victory will be one to remember for Alexander.

“I’ve never scored five touchdowns in a game,” he said. “Maybe in little league, but not on varsity.”

Posted by Jackson County Advocate at 10:49 AM