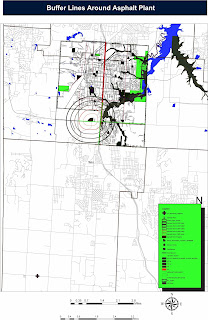 A community meeting was held on Monday evening in regards to the Ideker Asphalt Plant, located in southern Kansas City at I-49 and MO-150 Highway, bordering Grandview. The meeting, hosted by the Grandview School District, the City of Grandview, and Concerned Citizens for AIR (CCAIR), an organization formed recently in protest of the plant’s permanent residence in the community.

"This is a public health issue,” said Attorney William Session, who has been helping the city and CCAIR establish the legal framework for the case. “I’m just the vehicle to get you from point A to point B. The rest is really your concerns, your issues and your risks, as much as they exist.”

According to Session, Grandview’s residents breathe air which may contain hazardous substances due to the proximity of the asphalt plant to the city, as well as to two of Grandview’s elementary schools: Belvidere and Butcher- Greene.

“There is no doubt that what comes out of the plant contains hazardous pollutants,” said Session. “Whether you breathe it or not depends on where you are, not only on a daily basis, but on a seasonal basis.”

The City of Grandview became concerned with the plant some time ago, and of greatest concern was public health and economic development. The major issue was that the Ideker plant was placed where it is without an opportunity for public comment. Through several months of conversation with the State of Missouri and the Missouri Department of Natural Resources, the City of Kansas City and various governmental agencies that had a hand at permitting the plant to be located where it is, the end result determined that the plant was permitted and is going to be there permanently.

“As much as anything, that’s probably why I’m standing here at the encouragement of City of Grandview officials, and now the Concerned Citizens for AIR,” said Session.

When the plant was first permitted for operation, it was allowed under a temporary permit, which was set to expire in June of 2014. Those who already showed interest in what was going on with the plant prior to the decision were never informed that the plant operator had applied for permanent permits  for operation.

“There was no opportunity for public discussion, even when it was well-known that there were special interests by those who are exposed to what comes out of the plant,” said Session.

“Of course, it’s a temporary restraining order,” said Session. “We don’t know how long, or whether or not that will become a permanent restraint on MDNRs actions. It’s uncertain. We believe it should be; they believe it shouldn’t.”

According to Session, there is a consensus of the State of Missouri that they did nothing wrong and the plant should remain where it is permanently. The types of emissions due to the plant operation contain dust and other contaminants. Many of the emissions are undetected by sight or odor, according to Session, which is why there is a concern for the permanency of the plant. The emissions may contain particulate matter (dust), sulfur dioxide, nitrogen oxides, volatile organic compounds, carbon monoxide and other hazardous air pollutants. Such emissions are regulated under federal law standards, which are delegated to state agencies like the Missouri Department Natural Resources. There is a limit on what can be emitted into the atmosphere and for citizens to remain safe. According to a study done by air quality experts that the City of Grandview hired a year and a half ago, the Missouri Department of Natural Resources applied outdated standards to measure the pollutants coming out of the plant.

“Legally, we think they should be using the current standards,” said Session. “MDNR has chosen not to. Those standards are far more restrictive than the ones that were actually used to review the permit for the plant.”

The study also determined that MDNR failed to determine the impact of PM2.5 emissions, which are tiny dust particles. According to Session, the concern is for the combination of what comes out of the Ideker plant with what’s already in the air. Finally, MDNR improperly calculated even larger dust
particles.

“Quite simply, ten tons is the limit,” said Session. “They allowed thirteen and a half tons of the material. This is just too obvious. How can you have a flat standard that says 10 tons of this particular pollutant can go into the atmosphere, and right on the permit it says 13.85 tons? There’s been no explanation for that even to this day.”

The lawsuit filed claims that the Missouri Department  of Natural Resources failed to review the various contaminants and that the plant is in violation of the national air quality standards. To join the citizen-based advocacy efforts of the Concerned Citizens for AIR, contact CCAIR President Kathy Sutoris by email at csideagain@yahoo.com, visit the Grandview Chamber of Commerce office in person, or email Chamber President Kim Curtis at ksc@grandview.org. Concerns can also be submitted to 37th District State Representative Joe Runions via email at joe.runions@house.mo.gov.

At a special open meeting held November 4 at 6:15 p.m., the Grandview Board of Education unanimously approved an administrative recommendation that the district donate up to $5,000 to the Concerned Citizens for AIR. Contributions are not tax deductible, and will be used to support the advocacy efforts. If you would like to make a donation, remit payment to Concerned Citizens for Air, Inc., P.O. Box 543, Grandview, MO 64030.
Posted by Jackson County Advocate at 10:06 AM