The Day Our World Turned 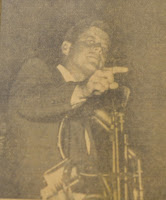 Fifty years ago, the United States was turned on its axis. The 35th president of this nation, John F. Kennedy, was assassinated on Friday, November 22, 1963 in Dallas, Texas. Kennedy’s murder was widely publicized, and conspiracy theories and details of his personal life are still present in media today.

Lee Harvey Oswald was accused of the crime and arrested that evening, but Jack Ruby shot and killed Oswald two days later, before a trial could take place. The FBI and the Warren Commission officially concluded that Oswald was the lone assassin. However, the United States House Select Committee on Assassinations (HSCA) concluded that those investigations were flawed and that Kennedy was probably assassinated as the result of a conspiracy.

Despite what exactly may have taken place that November day in Texas, people all across the country and the world, were glued to their television sets and radios for at least the weekend following his death. While I wasn’t born until many years later, my parents and other friends in the community provided me with some insight into where they were and what they were doing when they heard the news of Kennedy’s assassination.

My dad was sitting in his fifth grade class at Holloman Air Force Base in New Mexico, and remembers an announcement coming over the intercom and then school being dismissed for the rest of the day. My mom was in second grade at Kratz Elementary in St. Louis.

“I remember my teacher called us into a circle in the back of the room,” said my mom, Becky Davis.
“She told us what happened, and we all cried. I remember watching it on TV all weekend.”

My husband’s grandmother, Carolyn Wilson, recalls being at home with two young children when she heard the news on the radio. Being the early sixties, a lot of women were at home doing housework with the television or radios on in the background.

“I don’t remember much about the rest of that day, but can still see myself as I stood there at the sink and then sort of wandered around for a few minutes,” she said.

Former Grandview Mayor Jan Martinette and her family had just moved to a house behind the Terrace Lake Shopping Center. She was home with two children under two years old and remembers
being stunned at the news reports. Retired Grandview teacher Margaret Ferman was in college and was just returning to her dorm room.

“I usually didn’t turn on the radio, but for some reason I did that day and heard the announcement of JFK being shot in Dallas,” said Ferman. “ Needless to say, news spread around campus quickly and most of us were in shock that such a terrible thing could happen in the US to our President.”

Grandview C-4 Superintendent Dr. Ralph Teran recalls being in his fourth grade class at Caldwell Elementary School in Wichita, Kansas.
“I don’t recall how or what, if anything, we heard at school that afternoon, but I remember watching days of coverage on national television up to the funeral march and burial,” Teran said.

Grandview City Administrator Cory Smith also heard an announcement over the loud speaker at his high school. He recalls he was in Latin class and when it was announced, everyone was in a state of shock.
“Our teacher tried to calm everyone down, but then started crying herself, said Smith. “I think it was within the same hour or close to it when we heard that he had actually died. School was suspended, we were all sort of in shock, and we all left for home that day and of course, the whole weekend was consumed with continual TV coverage of the assassination, killing Oswald, and the funeral, and all that went with it. It was pretty traumatic for everyone who lived through that, and of course, it changed the course of history and created all sorts of conspiracy theories.”

Aggie Turnbaugh, former owner of the Advocate, remembers watching As The World Turns on television when news of the shooting broke in. Being in the newspaper business, I can only imagine what those who worked at the paper were going through. Trying to get the story right, and with the news reports coming in, I’m sure it wasn’t an easy task.

Unfortunately, we no longer have the issue of the Advocate that was published the week after Kennedy’s assassination. Newspapers were kept as souvenirs rather than sources of updated information.Years ago, a former employee of the newspaper took a good chunk of the historical photos and clippings from our archives.

Kennedy’s death changed the course of our national government, and the assassination proved to be an important moment in U.S. history because of its impact on the nation and the ensuing political repercussions. Television became the primary source by which people were kept informed of events surrounding Kennedy’s assassination. I still watch the specials that are on television today regarding the incidents on November 22, 1963, and I’m certain that someday the country will know the truth of who killed John F. Kennedy and whether or not there is any truth to the theories.
Posted by Jackson County Advocate at 10:28 AM