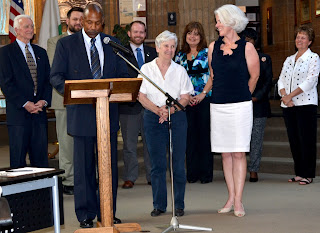 What began as an exercise routine many years ago has turned into local accolades for Grandview resident Katie Reimann. Walking five miles roundtrip in the morning and another five miles in the evening, Reimann has affectionately become known as the Grandview “Recycle Lady” by many neighbors and friends in the community.

Reimann, who has resided in Grandview since two days shy of Christmas in 1976 when her late husband was stationed at Richards- Gebaur, retired from nursing at St. Joseph Health Center and saw her three children graduate from Grandview High School.

Growing up with a father who lived in the Adirondack Mountains, Reimann and her sister would often go on walks with their dad through the woods.

“My dad always told us, ‘you carry it in, you carry it out.’ Whatever we took with us, gum or candy wrappers, always had to go back in the house,” said Reimann.

Today, on her daily walks, Reimann picks up recyclable materials and takes them along her journey.
She says she picks up some actual trash, though not all of it, and she knows where all the larger trash receptacles are around town.

“When I see stuff in the street, it drives me crazy,” said Reimann. She has been an active member of the Highgrove Estates Neighborhood Association and was Block Captain when informational flyers were distributed to neighbors.

On Tuesday, July 14, Grandview Mayor Leonard Jones and the Board of Aldermen presented Reimann with a proclamation and named her Grandview’s 2015 Citizen of the Year. A resident is selected annually who has earned the respect and admiration of the Grandview community for his or her untiring efforts in improving the quality of life.

“I am so humbled by this,” said Reimann. “There are people that do so much more than me picking up trash. I just couldn’t believe it. I mean, why me? I’m still in disbelief.”

Reimann said that she enjoys her walks outdoors because of the things she sees. She likes the bunnies, squirrels and birds, and she says it’s good for the waistline. In a thank-you letter to Mayor Jones, Reimann said she is sure that her father is looking down and smiling.

“I’m sure he’s proud that I’m still taking in what I brought out, even if it’s not mine,” said Reimann.
“We are grateful for Katie,” said Jones. “She has been a blessing and she is very selfless. We appreciate her very much.”

As part of her recognition, the Recycle Lady Katie Reimann will serve as the Grand Marshal in the 2016 Truman Heritage Festival Parade.
Posted by JCAdvocate at 10:00 AM