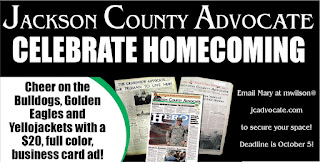 Posted by JCAdvocate at 10:22 AM No comments:

Fit for a Queen: 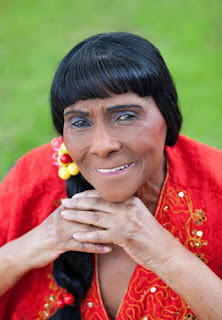 
Eighty-six year old Helen Hunter is not the typical nursing home patient. With her long, silky black hair and full face of makeup, she greets visitors with a warm smile and handshake. Hunter’s doorway is fully decorated in shimmery fringe; she breezes through with light eyes and a wide grin.

“It’s decorated for the queen,” said Hunter. “It makes me feel pretty special.”

She should feel special. Hunter, a resident at Life Care Center of Grandview, competed in and took home the crown in the Missouri Health Care Association sponsored Ms. Nursing Home Pageant after winning her district’s competition in June. Hunter, the cover lady for the 2014 Life Care Leader magazine, competed against 11 other ladies in district one. During the event, which was held at First Baptist Church of Raytown, she wowed the judges (local health care and senior services providers) with her beauty, charm and confident answers as they interviewed her about her life.

Hunter went on to compete for the state crown in Branson on August 24. Once again, she impressed the judges. This year’s title wasn’t Hunter’s first success in the annual competition. In 2013, she was crowned first runner-up in her district, leaving her with wonderful memories and the desire to compete in the pageant again this year.

Hunter’s background undoubtedly helped her prepare for the pageant. During her younger years, she worked as a fashion model and became a licensed practical nurse to help put her three children through private school. Once her children had graduated, Hunter became a Mary Kay Cosmetics beauty consultant. She thrived in this position and quickly rose to the top, becoming the first African-American senior director for the company, a position she held for 23 years.

“I’m president of the residents here at Life Care,” said Hunter. “Now I’m queen for the state, queen for Life Care, and I was the runner-up before. That’s four titles I have now.”

She prides herself on being an ambassador for the residents in the nursing home in Grandview. Hunter advocates for those who cannot speak for themselves. Living at Life Care Center for approximately 2.5 years, she has been actively involved in working with department heads to make the facility a better place for all residents.

She works with a group to set performance goals and constantly encourages more residents to attend her meetings. Hunter hopes to help energize residents and motivate them to live happy, fulfilling lives. Her goal is to make a positive impression on everyone she meets.

“I didn’t know that so many people were supporting me,” said Hunter. “This really put Life Care on the map as they’ve never had a queen before.”

Hunter said those at Life Care would like to see her in the pageant again next year. “I hope to not be here then,” she said. “My son is buying a home and I hope to be able to live with him soon. This place is more like a family than it is a nursing home.”
Posted by JCAdvocate at 10:22 AM No comments: