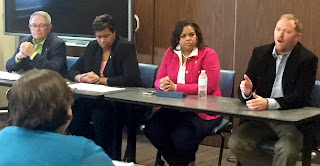 “We brought in elected officials from both the Senate and the House to give us a sort of wrap-up of what happened in the most recent year in the Missouri General Assembly,” said Gerling. “The thing that I find odd is that is seems as though not a lot actually happened this past year.”

According to Gerling, there was a lot of conflict and legislation passed that was ultimately vetoed by Governor Jay Nixon. The “Right-to-Work” piece of legislation dominated the others, according to Holsman, which is a law that prohibits employers from entering into a contractual agreement with labor dues associated with it.

“For me, it’s a free rider issue,” said Holsman. “If you’re going to have higher wages, better benefits and more security in those contracts, then you should have a responsibility to pay for that negotiation. You shouldn’t get it for free and that’s what Right-to-Work does.”

Holsman was against the Right-to-Work legislation, which passed in the senate. According to Holsman, senate leaders knew that with the Governor’s extensive veto list, it wasn’t legislation worth breaking the senate over. Pressure from donors on the senate leadership brought conflict within the chamber.

“Nine out of ten times, we’ll find a gray medium to negotiate with and everyone is a little uncomfortable,” said Holsman. “With this particular piece of legislation, there was no middle ground.”

The Right-to-Work bill was filibustered by democrats prior to the end of session. Session is required to end on a Friday at 6 p.m. The Thursday before and on Friday of this session, only two votes occurred in the senate.

“Anyone who is a historian in Missouri Senate will tell you that 60, 80, even 100 votes happen in those last few days,” said Holsman. “But this time, we had only two.”

The other passage was the FRA bill, which provided $3.8 billion in Medicaid funding, ending session a rare three hours prior to the 6 p.m. requirement. The concern was, according to Holsman, that 24 conference committee reports and 148 house bills died because of the Right to Work legislation, which was ultimately vetoed by the Governor.

“Consequently, a lot of good things, things that all of us cared about, ended up dying because of the headstrong position of the Republican leadership who forced that bill through,” said Holsman. “I’m hopeful that this next session will not see a return of the Right to Work.”

According to McCann Beatty, most everyone in the House had bills that didn’t get heard due to the lack of items brought forth in the Senate. “We all had some things that didn’t make it,” she said.
With the tumultuous ending in the legislature, Curls added that there were a few things that were completed, including permanent authorization of the Kansas City Area Transportation Authority half-cent sales tax.

“The tax was sun-setting at the end of the year and we stood to lose almost 40% of our bus service if it had not passed,” said Curls. “St. Louis has permanent authorization of their sales tax, and this allows Kansas City to be able to preauthorize the tax as needed.”

The climate of the legislature is such, according to Curls, that it is difficult to get any legislation relative to taxation passed. “Luckily, this was just a reauthorization and not a new tax,” she said.
Going into a major election year with new leaders in both the Senate and the House, Gerling asked the legislators if we can expect to see moderate legislation.

“What they will do is they will let the crazy legislation come to the floor and pass it in order to keep the peace among their party,” said McCann Beatty. “Anytime you have 44 versus 117, the art of compromise just isn’t there. Unfortunately, it’s the citizens of the state that suffer as a result.”

Before term limits kicked in, Gerling stated that a lot of the conflict was region-based, rather than between Democrats and Republicans. “It’s much more political now,” he said, “right or left.” The majority of Kansas City is represented by Democrats.

“Because we have the Kansas City Caucus, which is democrats and republicans, I think that’s helpful,” said McCann Beatty. “We try to work together for those things that are important to the Kansas City region.”

She added that Kansas City as a whole has come out okay from a budget perspective, with UMKC seeing funding for two large projects. Gerling pointed out that the new majority leader of the house is from Jackson County.

“I really am happy with our legislators here in Kansas City,” said Curls. “We have very good relationships with each other and I will say that that is not the case on the St. Louis side. We stick together on Kansas City-related issues.”

Runions added that as a group, legislators meet a few times a year with the metropolitan mayors to help prioritize upcoming legislation impacting the Kansas City region.