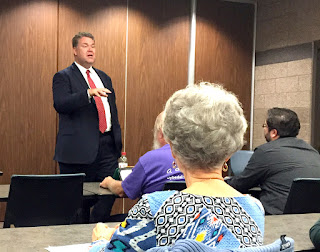 City Manager Troy Schulte, who has supported the South Kansas City Alliance from the beginning of the organization, spoke with members on Monday, November 9. He began by talking about the Royals Victory parade, held on November 3, with over 800,000 people in attendance.

“It was a terrific event,” said Schulte. “I have gotten calls from colleagues all over the country and as far away as Australia asking how we pulled that off.”

Schulte said, “That’s how we do things in Kansas City.” It is a testimony to the city, he added, that will pay dividends down the road.

“I just wanted to come down to South Kansas City to say thank you and keep doing what you’re doing,” said Schulte. “Whatever is in the water down here is working.”

According to Schulte, seventy-eight percent of non-residential permitting activity in Kansas City has occurred in the southland.

“This area is hot, and what we have to do as a city is keep that momentum going,” he said.

Plans that were put in place a couple of years ago are starting to come to fruition. Richards-Gebaur, which was struggling for redevelopment for some time, will see movement with the announcement of Sioux Chief’s relocation from Cass County. Along with further development along 87th Street, Oxford on the Blue, Cerner, Centerpoint and others, the southern part of Kansas City is seeing the bulk of development announcements.

“There is a tremendous amount of activity going on down in the southern part of the city,” said Schulte. “It is really the engine that is driving the city as a whole.”

Schulte added that while the projects may not get a lot of attention from a press standpoint, like the streetcar or downtown convention center, the jobs and true economic prosperity are happening in South Kansas City. He is looking at next steps to keep development momentum going.

“We need to build off of the gains that we’re seeing out here,” said Schulte, “and augment the quality of life issue.”

“Next year, we’ll target that Ruskin area,” said Schulte. “We’re also looking for feedback from the neighborhoods on where we can do some targeted code enforcement.”

Around the larger projects, the city is looking at taking care of some quality of life issues, with the dangerous buildings being a priority. Schulte has found results with an aggressive code enforcement program to help give a push to property owners to bring their properties up to code.

“These targeted enforcements have really paid dividends,” said Schulte. “It can drive some of those problem property owners out of business and they’ll sell and get the homes into hands that are more productive.”

For example, in a different part of the city, Schulte and his team focused on a four-block area and opened 350 cases. Within sixty days, 150 of those homes had been abated.

“With all this job creation and economic development, I want people to invest back into these neighborhoods,” said Schulte.

He added that single-family homeowners would be the best way to fix the education issues the southland is facing, specifically Hickman Mills.

“To have people with incomes buying these houses, and getting them out of rental properties would pay off,” said Schulte. “I’m looking forward to working with the South Kansas City Alliance in identifying areas where we can get the most bang for our buck.”

This approach has worked reasonably well in other parts of the city, and according to Schulte, it should work in South Kansas City as well.

“There are a lot of great things going on in terms of South Kansas City and economic development,” said Schulte.

He added that the conversations regarding rail access in the southland are happening. They are working on plans to get rail south of downtown and through Brookside and Waldo.

“There is certainly a demand out here around Oxford on the Blue and the Cerner project for light rail,” said Schulte. “We as a city have got to foster that need and figure out a way to get that from a connectivity standpoint.”

While it wouldn’t have solved all of the city’s issues moving 800,000 people in and out of downtown for the Royals Victory parade, Schulte stated that more transit options would have been helpful. The city commandeered 400 buses to move people from the outlying areas into downtown Kansas City. According to Schulte, 10,000 people were still waiting for buses at the remote locations at the parade start time.

“We had plenty of buses, we just couldn’t get through the traffic congestion in downtown Kansas City,” said Schulte. “Having another long-term transportation issue, from a logistics issue, in another thirty years we might be better prepared for it.”

Schulte added that he was pleased to see Cerner’s plans from a campus-approach to development, with their own exit and entrance onto I-435, have been abandoned due to cost issues. Cerner is now looking at ways to fully utilize the existing Bannister and 87th Street access points.

“That will then be able to support additional retail and commercial activity along those corridors,” said Schulte.

With all the good things happening in South Kansas City, Schulte said his job is to make sure that the City keeps the momentum going.

“That’s what‘s exciting about it,” Schulte. “We’re trying to figure out how to reinvest in those corresponding neighborhoods around the developments.”
Posted by JCAdvocate at 10:30 AM