City of Grandview Continues to Progress 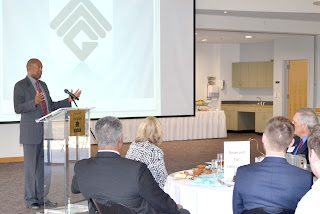 In his third State of the City address since taking office in 2014, Grandview Mayor Leonard Jones began by thanking the other elected officials, the Grandview Board of Aldermen, for their service to the community.

“I have been blessed to work with this Board of Aldermen,” said Jones. “It has been great to sit around the table every Tuesday night and put our thoughts up on the board to determine where we should go as a city.”

At last year’s State of the City address, Jones looked forward to the upcoming transition of Truman Corners into Truman’s Marketplace. With construction ongoing and the opening of Burlington in 2015, progress in the shopping center has been great. This year, Grandview will see the opening of Ross: Dress for Less, Five Below, PetCo, TJ Maxx and many others. Burlington has enjoyed great success in Truman’s Marketplace, as well, according to Jones.

“Since Burlington’s opening in October, it has been the number-one store in the region: from Oklahoma all the way to Nebraska,” said Jones.

All departments in the City of Grandview are continuously working toward making the city a better place to work and live, said Jones. Each department was included in a video regarding improvements made specific to their area in 2015. The video can be viewed by visiting the City’s Facebook page or website.

“We wanted to show the community some of the people who work behind the scenes and what they are doing,” said Jones. “Grandview is growing and there is much more to come.”

Jones said the Board of Aldermen, along with economic and community development staff, are working hard to bring new businesses to the City of Grandview. This includes giving new life to existing buildings with the possibility of repurposing some. He stated that the biggest project to anticipate in 2016 is the Gateway Village project.

Off of Highway 150 and east of Byars Road, Gateway Village will be home to the largest amateur sports complex in Missouri. The project includes sixteen soccer fields, a number of hotels and restaurants, a fieldhouse and other components, making up the multi-million-dollar mixed-use project.

“This is going to be a monumental task, to say the least,” said Jones. “It has been a while in the making. It is our hope and desire that in the coming weeks and months, we’ll be able to put together a TIF (tax-increment financing) program and a conceptual development plan that both the developer and the City of Grandview can agree to.”

In addition, community development is working on a plan to repurpose the former Rodeway Inn near the southern border of the city.

“We want everyone to know that Grandview is not just a city on I-49,” said Jones. “We are a growing community that people can come to not only do business in, but can also work, play and live in the City of Grandview.”

Jones stated that Grandview will remain a steady financial force in the coming years, as the city is on the road to keeping its stellar financial rating. This rating determines bonding-capacity ratings and percentages. The city’s Comprehensive Annual Financial Report has also received the Government Finance Officers Association of the United States and Canada (GFOA) Certificate of Achievement for Excellence in financial reporting for 27 years in a row.

“This all shows the financial viability and stability of the City of Grandview,” said Jones.

The Grandview Chamber of Commerce, according to Jones, plays a vital role in the business success of the city. This year, the Chamber plans to recognize at least two dozen businesses who have established new locations in Grandview, expanded or experienced major milestones.

One of the biggest transformations to take place in the City of Grandview is on Main Street, Jones stated. Walking downtown, visitors can experience a hip coffee shop, a locally-grown organic grocer, restaurants and many other upscale businesses. Grandview Main Street, Inc., along with the City of Grandview and the Grandview Chamber of Commerce are working on a downtown revitalization and seeking funding for arts programming.

“2016 is a year of investments in projects and programs for the City of Grandview,” said Jones. “The promise is this: the best is yet to come.”
Posted by JCAdvocate at 3:35 PM