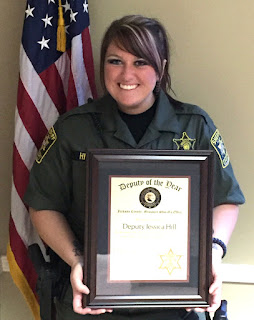 Deputy of the Year Jessica Hill (pictured above) was commended by her superiors for showing “calm in the face of a chaotic situation” as a call in rural Independence elevated from a burglary in progress to a foot chase. Deputy Hill’s quick thinking and organization helped lead to the apprehension of both burglary suspects.

Sergeant of the year Dale Covey, over the course of a year, has served in a supervisory role over the Community Resource Unit, Motorcycle Unit, Concealed-Carry Unit, and Building Services, playing an instrumental role in the JCSO’s move from its previous headquarters to the current facility off Lakewood Way. “It takes a unique person to supervise units from such diverse disciplines,” Capt. David Epperson wrote in his nomination letter. “Sgt. Covey is a model for effective supervision.”

Reserve Deputy of the Year Joel Paslay worked with the Child Protective Center every week to help the department save on manpower and provide a vital service to the community.

Dispatchers Theresa Hunter and Eric Spardley were both given letters of commendation by their superiors as well. Hunter was honored for her actions on the night of July 6, 2015 as the communications unit was experiencing a mass outage during a dangerous thunderstorm and tornado warnings. Hunter was able to reroute calls to Lee’s Summit during the situation. She also received praise for her work handling a suicidal subject and officer-involved shooting on the same day.

Spardley was commended for going above and beyond his job scope during dispatch communications with deputies, often asking additional questions in an effort to identify and locate suspects and to ensure the correct information is being given during the investigation.

Civilian of the Year Robert Harman, responsible for the maintenance and care of headquarters, was lauded by his superiors as someone who will “accomplish the tasks that no one else will.”

Meritorious Service – Donna Rellergert is the civilian supervisor of the concealed-carry permit unit. Rellergert was noted as “knowledgeable about the entire conceal carry process, the approval process, the denial process, working with the county counselors’ office, working as a team member of the unit as well as supervising the unit.”

Painter’s first Life-Saving Award came in June 2015 when he was off-duty and used CPR to revive an 18-month-old neighbor that was not breathing. Painters and Souder were also awarded for provided life-saving medical treatment to a victim of a vicious dog attack where the victim’s own dog attacked her, tore off all her clothes and chewed off her leg. Love was recognized for finding a car sitting the lanes of U.S. 40 Highway at Phelps Drive with a driver having a heart attack and had stopped breathing. Blodgett, Postlethwait, Souder, and Painter all arrived and through a team effort brought him back.

Don Chambers received a Meritorious Service for his continued performance as a clerk at the Warrant Unit.

“These honors are given as a display of some of the best law enforcement work we were fortunate to see in 2015. Each individual recognition has a story behind it, and I am proud of every man and woman that puts on uniform to protect Jackson County each and every day.”
Posted by JCAdvocate at 10:06 AM