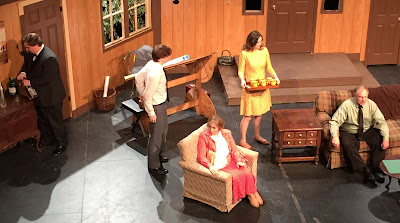 It doesn’t take a nerd to notice that community theater continues to thrive and grow in Lee’s Summit. Summit Theatre Group’s fifth season kicks off March 11 with a production of The Nerd at the Metropolitan Community College-Longview Cultural Arts Center. STG founder and president Ben Martin said this season opener is another milestone that shows the continued connection among the arts in Lee’s Summit and community theater.

“Making it to our fifth season is a great indicator of the amount of community support we’ve been given,” Martin said.

Lee’s Summit West Theatre Director Brad Rackers is directing the show. Rackers said the humor and lively aspect of the show will alone make it stand out.

“This is an awesome group of talented people who bring the text to life, said Rackers, who has been teaching at West for six years, with six years previous experience at Grandview High School. “We have fun at every rehearsal and have brought this fast paced comedy a new energy and excitement.”

The Nerd is a raucous story about a young architect in Terre Haute, Indiana. As the story goes, Willum Cubbert has often told his friends about the debt he owes to Rick Steadman, a fellow ex-GI whom he has never met but who saved his life after he was seriously wounded in Vietnam. He has written to Rick to say that, as long as he is alive, “you will have somebody on Earth who will do anything for you.” Willum is delighted when Rick shows up unexpectedly at his apartment on the night of his 34th birthday. But his delight soon fades as it becomes apparent that Rick is a hopeless nerd – a bumbling oaf with no social sense, little intelligence and less tact.

Rick’s continued presence among Willum and his friends leads to one uproarious incident after another, until the normally placid Willum finds himself contemplating violence – a dire development which, happily, is staved off by a twist to finish the performance.

For this year’s kickoff to the season, the cast of The Nerd includes Johnny Briseno as Rick, Easton Morrill as Willum, Laurie Crawford as Tansy, Dana Reynolds as Clelia, Bill Bergman as Waldgrave, Alex Phillips as Axel and Ian Morgan as Thor. Reynolds, Phillips, Briseno and Morrill all hail from Lee’s Summit; Bergman is from Grandview; Crawford from Pleasant Hill; and Morgan lives in Kansas City.

Martin has experience with this production and says he loves a good comedy to kick start a new season at Summit Theatre Group.

“I directed The Nerd a number of years ago with a high school cast,” he said. “We had a great time. I can’t wait to see this cast do this hysterical comedy as well.”

Following The Nerd, STG’s season continues with the 25th Annual Putnam County Spelling Bee in June, an outdoor musical, Joseph & the Amazing Technicolor Dreamcoat, in August, First Kisses in October and Every Christmas Story Ever Told (And Then Some) in December.
Posted by JCAdvocate at 3:58 PM