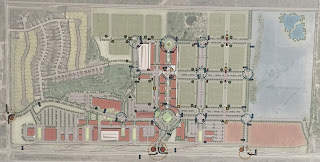 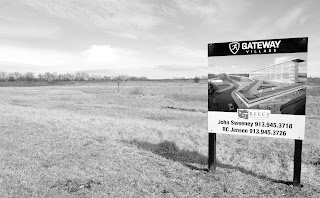 Gateway Village is one step closer to becoming a reality in Grandview’s undeveloped portion of the MO-150 highway corridor. The Grandview Board of Aldermen held a public hearing to consider the conceptual development plan, submitted by PG Partners, LLC, for the project on Tuesday, February 23. The plan allows for the development of a mixed-use project consisting of fourteen synthetic turf soccer fields, an 83,000 square-foot field house, three hotels, a grocery store, multi-family housing, parking garages and twenty-four buildings to be used as mixed-use retail, restaurant, medical and pharmacy.

“We wanted to show the imagination part and how a lot of effort and thought has gone into this,” said Developer Kurt Pycior. “When we make a commitment and go after something, we’re very, very good at it.”

In 2009, Deron Cherry (part of the Gateway Village development team) and his wife, Hope, met with Populous architect Craig Meyer and began the conversation for Gateway Village. The Cherrys envisioned a place where their own children could play soccer without traveling long distances.

“We constantly asked ourselves, ‘What kind of place are we creating?’ The concept was never about a plan, it was about creating a framework for the development of a place,” said Meyer. “We started out calling it the ‘Architecture of Soccer.’”

Pycior and the Cherrys dreamed of bringing an urban environment together with a soccer complex, which, according to Meyer, hadn’t been done before. Together, they worked to create a Zona Rosa or Plaza atmosphere combined with the feel of the Overland Park Soccer Complex.

“While we’re not recreating the Plaza buildings, we sort of wanted to create that walkable environment,” said Meyer. “By the time visitors get back in their cars to leave, they’ve done several things besides going to the soccer match. They’ve had something to eat, they’ve shopped.”

The idea is to make Grandview, and more specifically, Gateway Village, a family destination. Meyer added that the developers envision the complex to be a place of inspiration and aspiration. The development, located between Byars and Kelley roads, provides an interesting design challenge to Meyer and his team due to significant grade changes on the entire property.

“When you drive by the site, it seems relatively flat, but that’s not the case,” said Meyer. “It can have a grade change of nearly twenty feet in any direction.”

The footprint of the revised plan, unanimously approved by Grandview’s Planning Commission, is very similar to the original plan and continues to include a mix of uses. However, there have been changes to the location and size of some of the uses as well as adjustments to the internal street network. The number of soccer fields was reduced from 15 to 14, and the location of those fields has been moved to the northern central area of the development.

The amount of retail on the site has increased significantly (approximately 55%), and the plan now includes a mix of surface parking and parking garage structures.

“The parking that you see now was probably rearranged around twenty times,” said Pycior. “The layout you see now is purposeful. We took into consideration how far someone is willing to walk to get something to eat or how far someone will drag their kids to get to a soccer game. There are a lot of reasons on where we put certain things.”

Pycior added that Gateway Village will include something for every member of a family whether they play soccer or not. Phase one of the project, according to Pycior, will generate the completion and final phases of the village.

Phase one of Gateway Village will include the retail development, street networks, parking and 8-10 soccer fields completed for matches to begin in April of 2017.

As of last week, Pycior announced that Gateway Village signed a Letter of Intent (LOI) with PGA Tour Experience, which will include a driving range combined with a pitch and putt range, along with other building, office and accessory uses. The PGA Tour Experience will be located on the eastern edge of the development.

“We’re very proud of the development,” said Pycior. “It will be done to the very best. There is no other place in the world that looks like this.”

The public hearing for the conceptual development plan for Gateway Village was called to a close, and the Grandview Board of Aldermen will vote on Tuesday, March 8, to approve the plan.
Posted by JCAdvocate at 11:12 AM