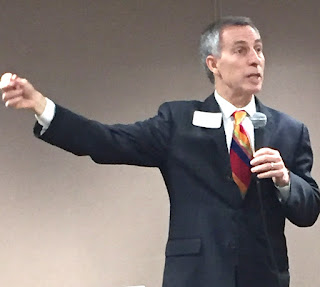 Seven years ago, Governor Jay Nixon appointed Stephen Miller to the Missouri Highway and Transportation Commission. Missouri is unique in that transportation is commission-driven, rather than direction and leadership on transportation coming from the Governor, who appoints a secretary or cabinet-level position to address needs, as in most other states. Missouri’s constitution vested in a six-person commission of ordinary citizens to oversee transportation in the state.

“Much to the chagrin of our governors, while people often look to the Missouri Governor for being responsible, it actually falls to this commission that I’ve been honored to serve on,” said Miller during his presentation last week to the South Kansas City Chamber of Commerce.

While the commission holds all executive authority ordinarily reserved for a governor, the state legislature also establishes the source of revenue for transportation. Missouri has three transportation revenue sources, including sales tax on vehicles, licensing fees and fuel taxes. Once those revenues are collected, they are deemed appropriated without legislative activity.

“That means we don’t have what’s happening in Kansas, where their budget shortfall is being funded out of money the taxpayers intended to go to transportation,” said Miller. “This has greatly saved us in Missouri.”

However, according to Miller, Missouri falls short on the front-end of what the legislature and citizens are willing to collect for revenue, despite the state's rich history of infrastructure investment.

“Unfortunately, my generation, our generation, has not been a very good steward of the investment made by previous generations,” said Miller. “Our predecessors, through taxes that they paid, realized the importance of establishing a vital transportation system.”

Missouri is the seventh-largest transportation system in the country. Today, there are 34,000 miles of road throughout the state, which is more roads than Kansas, Nebraska and Iowa combined. Due to the substantial access to rivers and tributaries across the state, Missouri also has 10,400 bridges to be maintained. There are 14 ports in Missouri that rely on the commission for funding, as well as 124 public-use airports.

“Our responsibility as a commission is to determine how we be good stewards of something that we inherited,” said Miller. “Our parents and grandparents paid these taxes and saw them as a fee for the things they use. At a time when we ought to be figuring out how we have one of the most robust transportation systems in the country, we are failing woefully.”

Missouri ranks 47th in the country in the investment to preserve the transportation network. Statewide, Missourians pay seventeen cents per gallon in fuel taxes, while Kansans pay twenty-four cents on the gallon. In Iowa, the fuel tax is thirty-cents. According to Miller, of Missouri’s 10,400 bridges, 641 are considered to be in critical condition, on the verge of being closed.

“We are not generating sufficient revenue to be able to adequately address these issues,” said Miller. “Around the country, we see that there are communities that are looking at the importance of raising the fuel taxes. We’re not with it here in Missouri.”

The commission has identified that what is needed to sufficiently take care of the system is around $160 million per year in additional revenue. According to Miller, that could be generated by a six-cent increase in the fuel tax across the board.

“All that allows us to do is essentially tread water,” said Miller. “It would allow us to just take care of the system.”

Miller stated that there are two other important needs facing Missouri’s transportation: the interstate problem and simply opportunity to fix congestion problems, replace bridges and other necessary upkeep.

“Our interstate system, starting with I-70, needs to be rebuilt from the ground up,” said Miller. “In the 200 miles from Blue Springs to Wentzville, reconstruction would cost anywhere from $2 billion to $4 billion. We have absolutely no plan on how to do that.”

If Missouri brought itself in line with the average fuel taxes from across the country, Miller said that the commission could begin to address the interstate problems, including looking at unconventional systems and building mechanisms.

“We have not found good ways, from a business perspective, to fund transportation,” said Miller. “We’re looking at new, creative ways that maybe didn’t exist before. But if we can’t even maintain what we already have, how can we possibly be credible leaders in transportation in the country?”

Miller stated he has been pressing Missouri’s legislature to take action. As a result, there has been conversation and a plan introduced to increase the fuel tax by one and one-half cents for gasoline and three and one-half cents for diesel fuel. That met opposition and was ultimately amended to be a 5.9-cent tax across the board, but one that would have to be voted on by citizens.

“That did pass through Missouri Senate and is currently sitting in the Missouri House,” said Miller. “I don’t know where that’s going to go. The important thing is we just can’t let our leaders off the hook.”
Posted by JCAdvocate at 10:00 AM