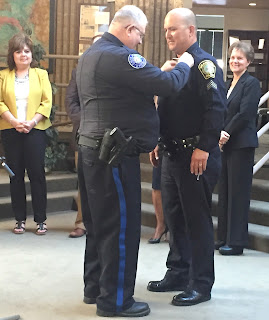 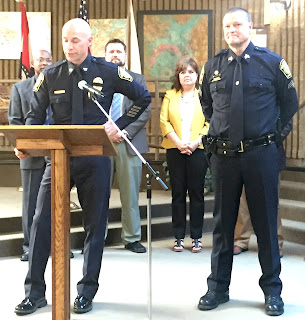 Grandview Police Chief Charles Iseman promoted two on his force to sergeant last week during the Board of Aldermen meeting on Tuesday, May 10.

“It’s a special night for us,” said Iseman. “The sergeant promotion is very critical to our overall success in the department.”

The Grandview police department, according to Iseman, is fairly streamlined, without captains and lieutenants on each patrol shift. On any given shift, the highest ranking officer is the sergeant. With that, added Iseman, comes a tremendous amount of responsibility and discretion.

“It is a very important position for us,” said Iseman. “We ask the sergeants to not only be supervisors, but to also be mentors, coaches and teachers.”

There were two openings due to a resignation and a retirement with twelve officers competing for the positions. The comprehensive process included a written exam, staff review, sergeant’s evaluation and a panel interview of outside commanders from across the metro and a state agency.

“One of the evaluators, who has been doing this for twenty-plus years and sits on numerous boards, said that for the first time he felt that every one of the twelve applicants could do the job,” said Iseman. “I think that’s a true testament to the caliber of officers we have here.”

Martin Studdard graduated from William Jewel in 1996 with a Bachelor of Arts in American History and spent 14 years in the corporate world before he was hired by Grandview PD in 2009. He graduated from the Kansas City Police Academy and spent the first few years of his career in patrol. The last five years, Studdard has served on the traffic unit and has been a motorcycle officer, a crash reconstructionist and a hit-and-run investigator.

Additionally, Studdard has served on the SWAT team for the past four years and is currently the team’s lead sniper. Along with the assigned duties, he serves as one of the department’s technical support with both vehicle and station systems.

“He has truly embraced our community engagement programs with multiple presentations throughout the community,” said Iseman. “He has a great attitude.”

Alan Walker served in the US Army until 1979, and holds a Bachelor of Science in Criminal Justice Administration from Park University, along with a Masters in Criminal Justice from American Military University. He was hired by Grandview PD in February of 2010, after twenty-five years of service in Blue Springs PD, retiring at the rank of sergeant.

Throughout his law enforcement career, Walker has served in many different capacities, including a field training officer, SWAT and he served six years at the undercover Jackson County Drug Task Force. He has received local awards and recognitions, including three life-saving awards for valor.

“When he’s not saving people’s lives, Alan is one of our primary in-house instructors,” said Iseman. “He obviously brings a wealth of knowledge and experience to his new shift.”

Walker will be transferring out of the detective unit into the night crew. He chose his wife, Lisa, to pin on his badge.

“To Martin and Alan, I will just say to look after your people, guide them,” said Iseman. “I look forward to the leadership you both bring to our department.”
Posted by JCAdvocate at 1:20 PM