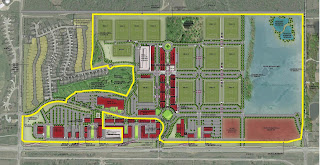 With only one no vote cast last month during the Grandview Tax Increment Financing hearing, the TIF Commission recommended to approve $61 million in TIF for Gateway Sports Village. The $300 million project, first announced in May of 2015, located between Byars and Kelley roads on the southeast side of town, will be a multi-sport complex with an emphasis on soccer, including retail and residential components.

The idea for the project is a shopping and entertainment district in the middle of the soccer complex, with fourteen turf fields, an 86,000-square-foot stadium and fieldhouse that has the potential to double as a convention center, three hotels and 334,000 square feet of mixed-use space, including 21,000 square feet of restaurants.

The tenant mix will consist of big-box type retailers, smaller retail, restaurants and hotels. Heartland Soccer, who will be the main tenant of the complex, has a “heads in beds” policy for their tournaments; meaning, if teams play in Heartland’s tournaments, they will stay where Heartland tells them to stay.

The 9-1 recommendation by the TIF Commission (the no vote coming from Mid-Continent Public Library’s TIF representative) will go before the Grandview Board of Aldermen on Tuesday, June 14. If approved by the Aldermen, the TIF will become part of a $78 million public support package for the $234 million portion of Gateway Sports Village, excluding the residential development component consisting of a 250-unit multifamily development and 40 single-family homes.

“The Gateway Village TIF Plan is a "Pay-As-You-Go" proposal,” said Grandview Mayor Leonard Jones. “Therefore, this plan benefits the developer because they get paid if they make money. This plan also benefits the city because there isn’t an annual appropriation obligation from the city, which reduces the city’s financial exposure. The plan has merits to both the developer and the city.”

Construction of the first phase is scheduled to begin in July, with completion expected in June 2018.

“This project will rival any complex in the country, or any complex in the world,” said developing partner for Gateway Sports Village Deron Cherry. “With this piece of property, we think we have that. With the City of Grandview, we’re working to make sure that this project is a project that all of you can be proud of. We will have the largest artificial (soccer) facility in the world and that’s something to be proud of.”
Posted by JCAdvocate at 10:00 AM