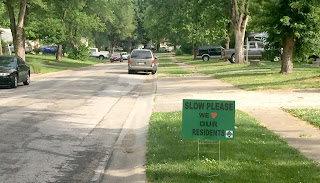 The Grandview Board of Aldermen spent some time focusing on public works programming and projects currently underway and forthcoming. Included in those projects are Main Street improvements, bridge work, sewer and water maintenance and speed bumps.

“I think it’s important for us to realize how much money we utilize that’s not on the City,” said Mayor Leonard Jones. “I think that’s important for when we’re articulating what’s going on in the city. There’s a lot being done with both state and federal funds.”

Public Works has received a number of speed bump requests, according to Dennis Randolph, Director. With the requests, the department has been working to develop a process to follow, mirroring what Lee’s Summit currently has in place.

“One of the things we’re trying to do in this process is give people time to think about whether or not there are alternatives to installing a speed bump,” said Randolph. “I’ve put them in and I’ve had success with them (in other cities), but they are miserable if you have to live by them and go over them daily.”

Speed bumps also raise concerns for fire and police traffic. Fire Chief Ron Graham stated that according to research he’s seen, speed bumps can delay response time about ten seconds per bump. Randolph stated that he has seen temporary speed bumps work well in areas, and the fact that they are removable during winter makes it easier for snowplows to clear the streets.

“If we are going to do something, I’d prefer we use temporary ones until we know exactly what is happening,” said Randolph. “Temporary speed bumps are also easier on fire trucks.”

In the meantime, Public Works had some signs made for residents to place in their yards to remind drivers to slow down. For those requesting the speed bumps, the signs provide an immediate action from the city with very little cost.

“We’ll see how these signs work,” said Randolph. “A lot of times it’s a complaint against a neighbor, and sometimes they just need a little reminder. It makes people feel better, like they’re doing something to prevent speeding on their street.”

The public works department has also been working on root control to help with backup prevention where there are mature trees. Randolph said that the measures in place for preventing sewer backup have been successful so far.

“We’ve gone three weekends without even a call for sewer backups,” said Randolph. “Even with seven inches of rain in the last month, we haven’t had complaints.”

A major project currently underway is the replacement of the 155th Street bridge. Working with the cities of Belton, Kansas City and Grandview, MoDOT is still implementing a design. Once that is completed, public works will bring an agreement before the Aldermen for approval.

Randolph also mentioned that an agreement with Kansas City Power and Light will be before the aldermen soon for power stations in the city. These charging stations, currently throughout the metropolitan area, will be installed at no charge other than electricity usage to the city for two years, at which point the user, or vehicle owner using the station, will incur the electricity charges for each station installed.

“We are actively pursuing different things that will make our facilities more efficient and take advantage of what’s available now that maybe wasn’t before,” said Randolph.

Phase 4 of the Main Street Revitalization Project is also underway. Randolph stated that last week, construction began on the opposite side of the street with sidewalks opening for pedestrians.

“If it stays dry, we’ll move along fairly quickly,” added Randolph. “I think sometime in August we’ll have the paving done to a point where the only thing we’ll have to worry about is the tower installation.”

Because Phase 4 is funded by a combination of the City’s Capital Improvements Sales Tax funds and a Federal Highway Administration grant, construction didn’t begin until spring 2016. Phase 4 is a more complicated project that will ultimately connect Phase 3 to the West Frontage Road.
Posted by JCAdvocate at 3:23 PM