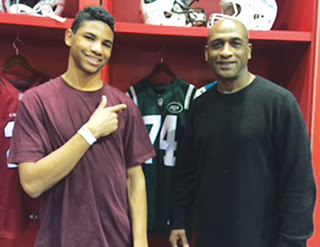 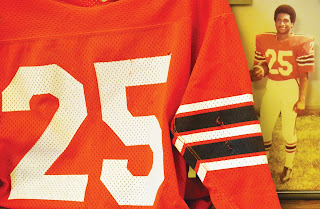 The Hickman Mills football program no longer exists, but for those who witnessed Cougar running back Mike Harper play, the memories have stood the test of time. He arrived at Hickman Mills High School in the fall of 1976, shortly after  the school’s inaugural year in 1972. By the time Harper graduated in the spring of 1979, he had left a legacy that is perhaps unmatched by any other Cougar in the 38-year existence of athletic programs at the school.

The greatness of Harper’s high school athletic career may have been best exemplified on the soggy, rain-soaked field during the evening of September 29, 1978, when he scampered for 358 yards and four touchdowns in a dominating 35-0 Homecoming victory against Raytown.

“I was blessed with the gift of speed. I knew I had a deep desire to beat people in  running,” he said.

It has been 37 years since Harper graduated from Hickman Mills, but some of the memories are still fresh in his mind.

“Probably the most long-lasting memories have been the friendships and fellowships that I’ve maintained to this very day,” he said.

Harper played alongside teammate Jeff Leiding, fullback/linebacker, who later made the Division I All-American team in 1983 as a linebacker with the Texas Longhorns.

“He was a phenomenal blocker, and an ever better tackler,” Harper said. “I benefited greatly because of his capabilities and his ability to move guys out of the way. He was probably one of the best fullbacks in the country at that time.”

As a student-athlete, Harper developed a number of relationships at Hickman Mills.

“I enjoy the fond memories of coaches, teachers, teammates, students and competitions between other rivals, for example Ruskin and Grandview – where we came out on the better end of most of those,” he said.

In the third week of Harper’s 1978 senior season, the Cougars defeated Grandview 14-7, which turned out to be the Bulldogs’ lone loss of the season. He recalled a crowd of about 4,000 attending the game. Harper said the Hickman Mills football team had a strong determination to win. Before and after wins, the Cougars would, as a team, listen to the 1977 hit song “We Are the Champions” by Queen. The 1978 squad proved to play like champions, as they finished the regular season with a perfect 10-0 record, while also becoming Big Six Conference champions.

The team ate like champions as well. He recalls eating pre-game meals with teammates at Ponderosa Steakhouse at Truman Corners.

Harper marvels at how good the Cougar defense was during his tenure at Hickman Mills. He said the unit that featured All-Conference players such as linebackers Leiding and David Mehrer; defensive
lineman Clint Loy; and safety Darren Blair, may have been the best in the state. All four went on to play college football.

“When I watched old films of our defense, it was amazing. We were dominant. It was hard to score against us,” he said.

Harper became popular among his peers in high school. The Hickman Mills art class created a mural of him playing football and when finished, they posted the art on the school’s wall. He said they cut the photo into 48 small squares.

“Each student took a square home and made it their project to blow that up to a full 1-foot by 1-foot square, and they all brought it back and put it back together,” Harper said. “I thought that was special.”

In a high school career filled with many individual and team achievements, perhaps the most impressive for Harper was breaking the 2,000-yard barrier during his senior season. He finished the regular season with 2,228 rushing yards, 9.6 yards per carry, while scoring 32 touchdowns.

“I did not realize at the time how much that would turn out to mean to me personally. Not only did it mean a lot to me, but it seems like it meant a lot to the school, to the community and to the city,” Harper said. “I did not realize that was a milestone that wasn’t reached that often.”

His accomplishment helped him make the high school Parade All-America Football Team in 1978. Eventual National Football League Hall of Famers John Elway, Dan Marino and Eric Dickerson also made the list of 1978 All-Americans. A September 28, 1978, Jackson County Advocate football article said, “Mike Harper is his name and running is his game.” The same could be said about Harper on the track surface. While in high school, he developed rivalries with three sprinters – Ruskin’s David Gaylord, Grandview’s David Haynes and Columbia Hickman’s Gary Anderson. The three also happened to be top running backs at their respective schools during Harper’s high school tenure. Anderson went on to play in the NFL.

“I had to run against them in the 100-yard dash and they were a challenge. If I didn’t have the perfect start and if I wasn’t on top of my game, any one of those guys could beat me,” he said. “David Gaylord was a stocky, strong runner. He was always a threat in the sprints.”

“It was a total team effort. Everybody had to be at their best,” he said. Harper claimed the state crown in the 330-yard intermediate hurdles. Harper appreciates the support and guidance he received as a student-athlete during his three years at Hickman Mills. He said his greatest mentors and supporters included his parents Linzy and Marva; grandmother Candis Shelby; teacher Ms. Snodgrass; Sunday school teacher Ms. Hickman; and Ray Beeson, assistant track and field coach and assistant football coach. He also mentions his neighbors Jeannie Martin and Shirley Johnson, who helped him out in so many ways – each being like another parent.

“I certainly had a group of people who all supported what I was doing, in many ways. Not just in football, but in life. They made me work for what I had to do because I had to work hard and wasn’t just given things,” Harper said. “I enjoyed all of the time that I had at Hickman Mills. It was a gift and blessing. I can’t tell you how many times I had the opportunity to say thank you to parents, coaches and fans. For a high school kid – looking back, that was a bigger deal than I realized. I was on television probably every week.”

Despite all his high school athletic accomplishments, playing professional football is not a level Harper saw himself reaching.

“I recall people making what I thought were outlandish statements about me playing pro football,” he said. “I was 178 pounds in high school. I had speed, but hadn’t yet envisioned myself playing pro football, but the opportunities to play in college were certainly available. I was recruited by many schools across the nation.”

Harper decided to take his talents to the University of Southern California, where in the fall of 1979 he joined the backfield of eventual Heisman Trophy winners Marcus Allen and Charles White.

“My dream was to be the fastest man in the world; my opportunity was to play college football,” he said. Harper made a good first impression as a freshman for the No. 1 ranked USC Trojans in a game against Oregon State.

“I gained 48 yards on my first carry and 126 yards in the game, and that was the second half of the game,” he said. “For a brief moment, I thought it was going to be easy.”

The Trojans completed the season with an 11-0-1 record, while claiming the Pac-10 title and defeating No. 1 Ohio State, 17-16, in the Rose Bowl. The College Football Researchers Association selected USC as National Champions. The Trojans also received a No. 2 ranking in the final Associated Press poll.

Injuries during Harper’s sophomore season did not allow him to compete the full season with Allen for the premier running back spot. He also had to red shirt the following season due to injury. He finished his USC career strong, by leading a committee of Trojan tailbacks with 685 rushing yards during his senior season.

Harper graduated with a Bachelor of Science from the Marshall School of Business at USC in the spring of 1984. The Los Angeles Rams selected Harper in the 11th round of the 1984 NFL Draft, but he did not make the roster. Harper then played a short stint in the Canadian Football League before returning to the NFL. After being cut a second time by the Rams, the New York Jets signed him as a free agent. Harper would go on to play four more years (1986-90) as a wide receiver and kick return specialist for the Jets.

After his NFL career, he spent nearly 18 years working for Fortune 500 companies such as Amdahl Corporation, Sun Microsystems, Hitachi Data Systems and NetApp. Harper eventually went on to work as a Development Director for Acres of Hope, a nonprofit program that helps provide for homeless women with children. During Harper’s time with the organization, they acquired a new property that he said was more conducive to the needs of the women and children. With community support, the program raised more than $2 million.

“That helped me appreciate how much community means,” he said. “Working at Acres of Hope and engaging with the community … taught me something as a man, as a person, as a dad and as a husband about how special that relationship with your wife can and should be.”

Harper also worked as the Director of Community Outreach for the Sacramento Mountain Lions, a member of the United Football League. He engaged with community organizations such as youth sports teams, churches and faith-based organizations. Harper now works as the Associate Athletic
Director for William Jessup University, Rocklin California. He began working at the university in January 2015 and his primary role is in development and fundraising for athletics.

“It’s a culmination of my athletic background, my interest in young people and athletics, and my skills from sales and marketing for the last 18 years,” Harper said. “I go out among different constituents, donors, alumni and administration, to build, identify and steward relationships with boosters, teams and community.”

He is now 55 years of age and lives in Roseville, California with Cheryl, his wife of 29 years. They have four children - Jazmin, Joslyn, Jarad and Jada.

“I’ve been blessed to have a beautiful  wife and family. Being a father means a lot to me,” he said.

As a Christian, Harper said he attributes his successes and relationships to his faith.

“I learned to be a loving person because of my faith,” he said. “I try to live every day, knowing and understanding that it’s because of my faith in Christ that I do have the opportunities that I have had and that I can overcome the challenges and obstacles that I face.”

Although Harper now lives many miles away from his original stomping grounds, the many moments he experienced in Kansas City are still close to his heart. He recalls his greatest childhood memories as running up and down streets, chasing people on the playground, sledding in the winter, going trick-or-treating, playing pool and table tennis, and hanging out with friends.

“I’m glad I was born and raised in Kansas City, Missouri. It’s a great mid-America, wholesome environment,” he said. “The times then were more innocent. You could choose to be innocent and you didn’t fall too far out of the margin of society. That time I spent at Hickman Mills was very special.”
Posted by JCAdvocate at 10:12 AM