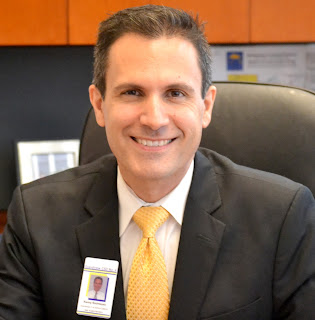 “The Grandview School District is one of the metro’s best kept secrets.” It’s a saying that Grandview C-4’s new superintendent has heard time and again since he was hired by the district in 2014. And it’s a rumor that Kenny Rodrequez would like to see disappear.

“I’d like to see that tune changed,” said Rodrequez. “I feel as though the districts surrounding Grandview have it figured out; they understand. There are some great schools, and while I’ll never be in a position to pit one against the other, we can make it to where we focus on the positives and not just the negative.”

One of his priorities going into his new position will be to better communicate with the community, parents, teachers, staff and students the good news happening in Grandview’s schools. Rodrequez plans to work on presenting a message that dispels any negative connotations the district has received in the past.

“Several years ago, I know the high school had an extremely negative perception in the community,” said Rodrequez. “I feel that’s at least somewhat changed, but we still have a lot of work to do.”

He added that with the positive changes in the City of Grandview, along with growing test scores and student achievement in the district, the community as a whole is moving in the right direction. He anticipates meeting with local elected officials and other community stakeholders on a regular basis to ensure the message being stated is cohesive and positive in nature.

Rodrequez brought 20 years of experience in education with him to Grandview. His first teaching job was in Carl Junction, just outside of Joplin, where he was a music teacher and band director for three years. After his daughter was born, he and his wife wanted to be closer to family, so they moved to the Tulsa area.

He spent three years as a band director in Sapulpa, Oklahoma, a district Rodrequez said is similar in size and demographics to Grandview. Moving up, Rodrequez then went to work for Tulsa Public Schools as a resource music teacher. The large district consisted of 40,000 students in nine high schools, 15 middle schools and 60 elementary schools. He also managed to complete his Master’s Degree in administration during that time, and continued to move up the ladder as an assistant principal, principal, and director of secondary schools.

After 12 years with Tulsa, Rodrequez came to Kansas City Missouri Public Schools as a director for secondary schools. It was there that he worked with Dr. Tony Stansberry, former Grandview superintendent who now works with the Missouri Department of Elementary and Secondary Education. While seeking a position as an assistant superintendent, he was advised by Stansberry that Grandview was a great district.

Since being hired, Rodrequez has served as Assistant Superintendent of Curriculum and Instruction in Grandview, and upon current Superintendent Dr. Ralph Teran’s retirement at the end of this month, will assume his new role on July 1.

For the first time since Stansberry was in Grandview, the district will have a superintendent with children in the district. Rodrequez and his wife have two children: a daughter who will attend Grandview High School and a son who will attend Martin City Middle School. This will also be a first for Rodrequez, as he has not previously worked in the same district his children attended.

“It will be different to have them here,” said Rodrequez. “It’s going to be something that we’ll all have to get used to as a family, but I think it will be a positive experience for us as well.”
Rodrequez expects his transition into his new role to be fairly seamless. Having been in the district for two years now, he has gotten to know the personalities and work habits of those he will now supervise.

“We have a great team in place, and I look forward to seeing us take everything we have accomplished thus far to the next level,” said Rodrequez.

In August, before the beginning of the next school year, Rodrequez will address teachers and staff at district orientation as Superintendent of the Grandview School District.
Posted by JCAdvocate at 9:37 AM