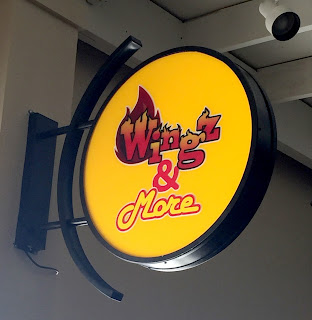 A popular restaurant in Grandview has been serving up more than chicken wings since opening last April. Wingz and More owners Chris Ray and Katie Benner have been busy making a name for themselves in the community, thanks to the power of social media.

Having known each other for a few years, Ray and Benner, who grew up in Kansas City and Grandview respectively, were looking at business opportunities to pursue in the area. They did some planning and research based on the needs of the community, and ultimately settled on opening a restaurant.

“We knew a chicken wing place was here before and was a fan favorite,” said Benner. “So, we started to look around and see what venues were available that might work for us.”

The duo began negotiations to find a home in the new Truman’s Marketplace shopping center redevelopment when they found the current location just across Blue Ridge.

“This location works out really well for us and the business and is much better suited for us,” said Benner. “Chris began working on recipes for the menu, while I worked on the back office side of things.”

Benner and Ray have worked various charity events together in the past, and knew that giving back to the community would remain a priority in their business endeavors.
“It’s something simple that we could do, especially with food,” said Benner. “Everyone has to eat.”
Ray suggested a lasagna dinner, where community members were invited via social media to come and have a meal, no charge, no questions asked. A tip jar that sits on the counter at Wingz and More is labeled “for the needy.”
“For our first shot at something like that, we had a fair number of people here,” said Benner. “With the tips, whether someone drops the change given back to them or larger bills, our customers are always contributing to those funds that we can then turn around and use for those meals that we provide.”
The lasagna dinner, only being advertised through social media and word of mouth, provided a warm, full meal for those in need in the community. On Facebook, the post for the dinner was shared 62 times, and talked about in various groups. That morning of the dinner, Ray also visited some areas in the community where he knew homeless and hungry people live and invited them to the restaurant.

“I thought about putting a sign out to advertise it as well,” said Ray. “I figure, if people are going to come in and take advantage of it, that’s not really my cross to bear. I won’t turn anybody away.”

While he’s more inclined to provide the meals outside of the major holiday seasons, he does understand there is a need during Thanksgiving and Christmas, and he has plans in the works to help fill that need. Ray has also begun working with the Grandview High School football program, helping provide food for the athletes to help alleviate the burden to the parents.

“You can’t expect kids to perform on a football field if they haven’t eaten,” said Benner. “A few from the team have even interviewed for jobs with us.”

Two young men from Grandview were recently hired part-time at the restaurant. Ray said he was pleasantly surprised by the mannerisms and overall maturity of the teammates from Grandview he has met.

Passionate about education and providing for the community, Ray ran for the Hickman Mills School Board a few years ago, losing the election by only 30 votes. Benner’s mother is a former teacher at Santa Fe.

Wingz and More has received rave reviews on social media, and has only advertised themselves through different media outlets, but Brenner said they’ve found the most luck through Facebook. On a local rant/rave page, Wingz and More is possibly one of the top-reviewed businesses within the last several months since they opened.

“We are so far ahead of where we thought we’d be at this point,” said Ray. “We had decent projections which we’re surpassing majorly. It is a good problem to have.” 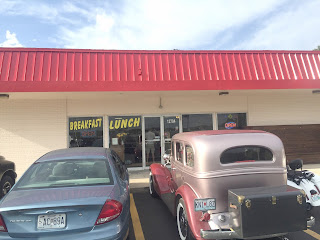 Having been at the Benjamin Ranch Café for 21 years, Michelle Reynolds opened the first Michelle’s Ranch Café 10 years ago in Raymore when Cerner announced their plans to purchase the properties and redevelop the former Bannister site.

“Of course, it took another 10 years after we moved out of there for anything to start happening,” said Reynolds. “We were told they were coming right in and so we did what we thought was best.”
More recently, the 10-year lease on the café in Raymore was up and Reynolds made the choice to move her restaurant to a new location.

“The people in Raymore were really good to me,” said Reynolds. “My restaurant there was off the beaten path a bit, so it’s nice to open up again and see all these familiar faces.”

Reynolds closed her restaurant in Raymore on Monday, July 25. On Tuesday, July 26, all of her furniture and supplies were moved to her new location in Grandview. With a team of help and assistance from local company JC Love, Reynolds was ready to serve breakfast in Grandview’s Ranch Café on Friday, July 29.

“We got in a lot faster and it went a lot smoother than I thought it would,” said Reynolds. “Everybody here is so awesome. The city, my staff and our vendors have really bent over backwards to help get us up and going again. They all worked their butts off.”

Visible from the highway, Reynolds pointed out that the new location is close enough for her former Raymore customers to visit, as well as for those who remember her from Benjamin Ranch.

“When I drove by and saw it was empty, I knew that was where I wanted to be. I couldn’t have picked a better location,” said Reynolds.

Her success at Benjamin Ranch was due a lot to current construction at the time, including the Walmart and Montgomery Ward stores going in. The entire operation was strictly word-of-mouth; no advertising was done in the 21 years the restaurant was open.

“It was mostly the construction guys who would eat there and then go back and tell their families and friends about us,” said Reynolds.

The restaurant business runs in the family. Reynolds’ daughter, Katie, owns and operates a restaurant in Peculiar, and she considers her son her left-hand-man.

“If I’m not here, my son will be,” said Reynolds. “We’re truly a family business. My other half, Mike, does all of my errand running for me.”

Visible from I-49, Michelle’s Ranch Café is located at 12704 E Frontage Road, in the former Livingston’s and Shirley’s restaurants. Open daily from 6-2 for breakfast and lunch, the Ranch serves home-style, comfort foods, ranging from biscuits and gravy to meatloaf and tenderloins.


“We’re excited and really happy to be here in Grandview,” said Reynolds.
Posted by JCAdvocate at 9:12 AM No comments: