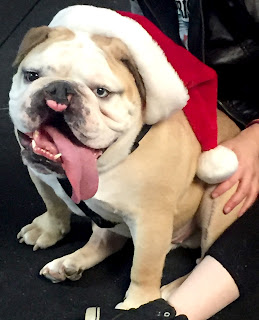 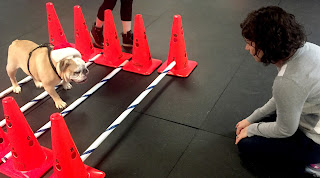 All Stanley wants for Christmas is to walk on all four legs. A two-year-old English bulldog, Stanley has spent his entire life overcoming obstacles. Born with a bilateral cleft lip, he underwent correctional surgery in March of 2015. He also had deformities in the bones in his legs, and his family was originally told there was no way to fix them. However, despite the initial setback, in July of this year, one of his hind legs was operated on to fix the disability that prevented him from walking. A few weeks ago, the other leg was corrected with another surgery.

“He was born with his hind legs tucked under him,” said Stanley’s mom, Deborah Pack. “So, with these surgeries, he’s learning to straighten his legs out and build the strength to stand and walk.”

Pack hopes that Stanley can be an inspiration to children with disabilities. Currently an ambassador for the Smile Train organization, Stanley helps to raise funds for children across the world to receive cleft palate surgeries.

“We want to show that Stanley is working hard, doing these exercises to build his strength,” said Pack.

Stanley visits the Animal Rehabilitation Center (ARC) in Grandview weekly to go through exercises and be monitored by Grandview Animal Hospital veterinarians. At the ARC, he also receives acupuncture and laser therapies. He’s undergoing therapy to ensure equal weight distribution on the corrected legs.

“When he first came to us, he was not wanting to put any weight on his back legs at all,” said Dr. Jill Clark, of Grandview Animal Hospital. “He is doing significantly better from where he was. We move at the pace of the dog, and each rehabilitation schedule is tailored to the individual.”

Before the corrective procedures, Stanley worked with what he had. He ate, with the help of his brother, and he got around in whatever way he could manage. During his recent surgeries, it was discovered that Stanley also has a curve in his spine, and he’s working on different methods to compensate for that disability, as well.

“That’s how children are, they work with what they have,” said Pack. “So, when they find out they have a friend who actually knows what they go through, it can help encourage them. It’s important for children to understand they’re not alone.”

Armed with a Santa hat, Stanley feels confident to get through his different therapies put before him during each visit to the ARC.

“The hat encourages him, in a way,” said Pack.

Whether it’s a hat, food, or another type of motivation, Stanley is encouraging to watch. Working three times each day at home, his family is pushing him to reach the goal of walking by Christmas.
The Animal Rehabilitation Center provides care in weight loss, family walks, playing fetch, post-operative exercise or making the most out of the time families have with their pets. Located at 1012 Main Street, Suite B, in Grandview, they can be reached by calling 816-492-6061.

“It’s a very unique thing they do here (at ARC) and we were very blessed to find them,” said Pack. “He’s worked really hard, and we think he can be an inspiration to others. While he’s not to that point yet, he’s trying.”

Like most two-year-olds, after his therapy sessions, Stanley has half of a McDonald’s cheeseburger. According to Dr. Clark, Stanley is not the only ARC patient that leaves and goes to get a cheeseburger. He also enjoys seeing Christmas lights, and when it’s nicer out, he likes watching boats and birds. You can follow Stanley’s story on Facebook, and cheer him on along his journey to walking by Christmas, under Stanley The English Bulldog Puppy fan-page.
Posted by JCAdvocate at 11:07 AM