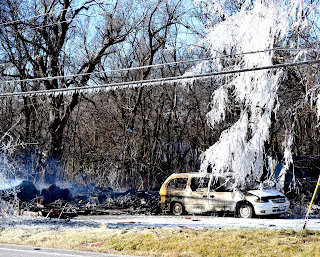 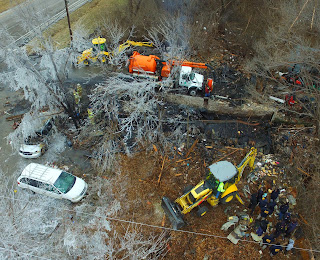 What began as a structure fire on Grandview’s southwest side of I-49 last week quickly turned into something potentially life-threatening. Just after 7 p.m. on Tuesday, January 3, Grandview first responders received word of a structure fire at JW’s Lawn and Garden Equipment, located at 14010 US 71 (140th and I-49).

According to Grandview Fire Marshal Lew Austin, the first responder to the scene drove to the front of the building, and deciding to set up a command post on the north, moved his vehicle to the side of the structure. At that time, the front-side of the building exploded. The initial blast could be felt all throughout Grandview and in nearby communities.

“We are thankful that no one was hurt,” said Grandview Fire Chief Ron Graham. “The cops usually get to the scene first, and as they do, they look around and one of our officers could have easily been killed.”

Graham said his firemen were aware of the building, and has previously discussed a plan of action if it were to ever catch fire.

“They knew they weren’t going to go in there,” said Graham. “When the call came in, it was determined that if the fire was anything at all, they would not go in and they would fight it from the outside. We were prepared for that. We weren’t prepared for this.”

The Bureau of Alcohol, Tobacco, Firearms and Explosives (ATF) was called in to help with the investigation. What was initially believed to be ammunition exploding inside the structure turned out to be the supplies for the makings of fireworks.

Austin added that it was rumored that there was a dog inside the building at the time of the blast, and that it was known that a wood stove was used to heat the building. Some trees to the west of the property were sheered to about three or four feet off the ground. Grandview firefighters evacuated 46 people after the initial massive explosion just after 7 p.m. The fire department has also reported a total of nine homes with broken windows caused by the initial blast, and 19 apartments with damage.
The last inspection completed at JW’s Lawn and Garden Equipment was in 2012. Austin said that for a typical business still in operation, an inspection every five to seven years is the norm.

While the investigation is ongoing, ATF is working to determine whether to file state or federal charges against the business owner.
Posted by JCAdvocate at 10:53 AM