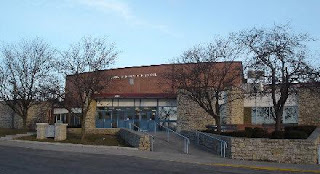 Grandview High School was under lockdown for the morning hours of Wednesday, January 11, after a firearm reportedly went off in a locker room. According to a statement from the Grandview C-4 School District, at approximately 8:55 a.m., there were reports that an object was discharged accidentally in a physical education locker room. Further investigation showed that it was a gun. All students were safe a no one was injured.

Immediately after the report, students were evacuated from the area and all students in the building were held safely in their classrooms as Grandview Police were called to investigate. During that process, the school went into an external lockdown until police were able to secure the firearm.

“The safety of our students and staff is our top priority,” the statement read. “Currently an investigation is in process and student discipline will take place according to board policy and statute.”

Policy JFCJ states: The Board recognizes the importance of preserving a safe educational environment for students, employees and patrons of the district. In order to maintain the safety of the educational community, the district will strictly enforce the necessary disciplinary consequences resulting from the use or possession of weapons on school property. No student may possess a weapon on school property at any time, except as specifically authorized during a school-sponsored or school-sanctioned activity permitting weapons. In such cases, the school district will provide secured storage of student weapons if necessary.

School property is defined as: Property utilized, supervised, rented, leased, or controlled by the school district including but not limited to school playgrounds, parking lots and school buses, and any property on which any school activity takes place whether held at home or at another school campus/location.

A weapon is defined to mean one or more of the following:
1.  A firearm as defined in 18 U.S.C. § 921.
2. Any device defined in § 571.010, RSMo, including a blackjack, concealable firearm, firearm, firearm silencer, explosive weapon, gas gun, knife, knuckles, machine gun, projectile weapon, rifle, shotgun, spring gun or switchblade knife.
3. A dangerous weapon as defined in 18 U.S.C. § 930(g)(2).
4. All knives and any other instrument or device used or designed to be used to threaten or assault, whether for attack or defense.
5. Any object designed to look like or imitate a device as described in 1-4.

Pursuant to the Missouri Safe Schools Act and the federal Gun-Free Schools Act of 1994, any student who brings or possesses a weapon as defined in #1 or #2 above on school property or at any school activity held at home or at another school campus/location will be suspended from school for at least one calendar year or expelled and will be referred to the appropriate legal authorities. The suspension or expulsion may be modified on a case-by-case basis upon recommendation by the superintendent to the Board of Education.

Students who bring or possess weapons as defined in #3, #4 and #5 and not otherwise included in #1 and #2, will also be subject to suspension and/or expulsion from school and may be referred to the appropriate legal authorities.

Students with disabilities who violate this policy will be disciplined in accordance with policy JGE.
This policy will be submitted annually to the state Department of Elementary and Secondary Education along with a report indicating any suspensions or expulsions resulting from the possession or use of a firearm as defined in 18 U.S.C. § 921. The report will include the name of the school in which the incidents occurred, the number of students suspended or expelled and the types of weapons involved.

“We have crisis plans in every building,” said Assistant Superintendent of Human Resources Lori DeAnda. “We have trained our administrators to deal with any kind of discipline that may come up.”

Part of that crisis plan, in an instance such as last week, is to notify law enforcement for support.
Anytime the district receives information that there might be some sort of weapon, each instance is handled differently based on the circumstances that surround it.

“It’s more likely that we have a firework brought in, but we treat every situation as though we don’t know what the weapon is,” said DeAnda.

Each building follows protocols to notify the district’s central office administrators, who then report to offer support to building administrators. District staff then work to identify any student that may be related to the incident or provide any information to help with the investigation at the site level. Anytime an administrator feels that an incident maybe have a criminal component or a law has been violated, the police department is notified.

Staff in the building is notified through a variety of ways, depending on the situation’s urgency.

“Technically, all of our buildings are locked down every day,” said DeAnda. “The perimeter doors are always locked.”

If law enforcement is involved, the lockdown procedures are not lifted until police determine it is safe to do so. The district’s administration also double-checks to ensure the safety of everyone in the building. While an investigation may be ongoing, the priority is to be certain that the area of the incident is safe and secure.

“We always want to improve however we can, and we are constantly networking with other districts and looking at best practices when it comes to security and safety procedures,” said DeAnda.

The district began a process after a previous incident to look at how to improve practices. During these conversations, it became evident, according to DeAnda, that while kids in the district are aware of the dangers associated with weapons, they are still struggling to communicate with adults when an unsafe situation arises.

“When we investigate, we discover that kids knew about it here and kids knew it there,” said DeAnda. “If we had been told at this time or at that time, we could have responded quicker or made the situation safer.”

DeAnda added that in many cases, the students know more about the situation than administration. Ironically, when last week’s incident occurred, district administration was in the high school building in a committee meeting discussing safety and communication with students.

“We have started that conversation,” said DeAnda. “Clearly we need to expand now and we know parents are asking the same questions.”

The district is developing a plan to contact parents when an incident occurs and include families in the conversations. The priority for parents is safety, and the district understands that concern.

Research proves, according to DeAnda, that schools are not made safer with the use of metal detectors.

“The perception is horrible,” said DeAnda. “That’s not us. I don’t believe that is the educational climate that we want to cultivate here in Grandview.”

The district will continue to work on safety procedures and communication with students, families and the community.
Posted by JCAdvocate at 1:31 PM