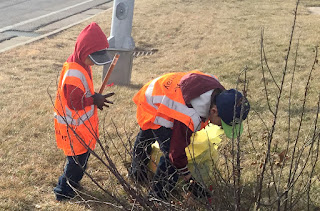 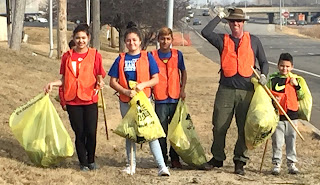 The Grandview Litter Gitters, as they’ve aptly named themselves, formed after a recent post on a social media website expressed concerns regarding trash at the redeveloped Truman’s Marketplace shopping center. A handful of community members decided to take action, and formed a small group of like-minded citizens to tackle the trash problem.

“It all started because of a rant on the Grandview/Martin City Rant and Rave page on Facebook the Friday before last,” said organizer Janet Dupuis, a 20-year resident of Grandview. “I commented on the post and told people that Grandview has a program called the Trash Busters Program, and they will pay $5 per bag of litter picked up from designated areas. When my kids were younger, we did this for Girl and Boy Scout activities. I also organized a group of kids from my neighborhood to pick up litter along Blue Ridge Road.”

From there, the conversation grew, and before long, a group of organizers scheduled a meeting place, garnered supplies from Grandview Public Works and JobOne, and got to work. On Saturday, February 11, nearly 40 people donned orange vests and carried bright yellow trash bags up and down Grandview’s outer roads in search of treasure…or trash.

“This was very short notice so we really didn't expect a huge group our first day,” said Dupuis. “We worked from 9 a.m. to noon and collected 72 bags of trash. We had already agreed that the money Grandview Public Works paid us would be donated to the Grandview Assistance Program.”

McAlister’s Deli provided a voucher for a free cookie to each worker and several students from Grandview High School’s cross country team and the A+ program joined in to earn service hours. According to Dupuis, the students even remarked that this was the most fun they've had volunteering yet.

On Monday, Dupuis turned the gear back into Public Works and a check in the amount of $360 will be donated directly to Grandview Assistance Program, all because a group of Grandview residents decided to come out from behind their computer screens and solve a problem they determined needed fixed.

“How cool is that? Look for another clean-up event sometime in May,” said Dupuis.
Posted by JCAdvocate at 12:50 PM