Ruskin students qualify for national competition thanks to teacher's push 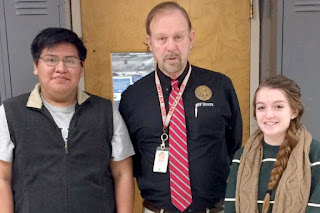 Tucked in the halls of Ruskin High School, in between ordinary and required classes, Robert Nellis’s students are nothing short of extraordinary. The dual-credit social studies teacher is known in the school as somewhat of a beast, with high expectations of his students.

“The district has afforded me the greatest opportunity in the world,” said Nellis. “I have an incredible wealth of talent in my classroom every hour.”

Some students, according to Nellis, find the level of curriculum and the rigidity of expectations to be too much. He considers it his calling to prepare his students for success in college, and life beyond.

“I want them to be well-prepared to succeed at the next level,” Nellis said. Former students have thanked Nellis for pushing them beyond what they considered their academic limits.

Over the last several years, Nellis has incorporated personal finance into his curriculum, including the Future Business Leaders of America’s (FBLA) competition conferences. Students have qualified to attend the national conference and competition, including two seniors this year who have the opportunity to go to Anaheim. Luis Jiminez and Shelby Woodroof took the online assessment together and earned the top score for students in Missouri.

“Everybody took the test, but I knew they’d be exceptional,” said Nellis. “I knew that they would score high. These two were chosen because of their skills and their talents, and the fact that they are really good kids.”

Last school year, Woodroof’s sister took the test and won the opportunity to go to nationals, but couldn’t make it due to the cost and timing of the event. This year, with time on their side, Jiminez and Woodroof plan to raise the funds for their trip.

“Once again, the district does not have the financial resources this year to send them to California,” said Nellis. He said he remains hopeful with the Cerner expansion in South Kansas City and the new intermodal facility out south, the district will begin to see further investment into its students in the future.

At the convention, the two will attend the National Leadership Conference and will include a competition portion and go through leadership-building activities and seminars.

Woodroof plans to attend Missouri University Science and Technology and study geological engineering, while Jiminez isn’t sold on a four-year school yet, but knows he’d like to study music therapy. They both agreed, though, that their teacher has pushed them to be better in school.

“He’s really motivated me. He doesn’t accept anything that’s not your best and he recognizes in each student what their best is,” said Woodroof.

“I thought I was doing my best until I got in his class and realized I have a lot of room to improve,” added Jiminez. “He pushed me way beyond any teacher would have.”

In order to make the trip, the two have setup an online GoFundMe page. Their very first donor, according to Nellis, is a former student and alum of Ruskin High School. Donations can be made at https://www.gofundme.com/luis-shelby-trip-to-national-fbla.

“We are both just really excited to represent our school,” said Woodroof. “We have really great kids here and we do really great things. It makes me mad when people look at us a certain way and demean what we are and what we are capable of doing.”

Both are exceptional students outside of Nellis’s classroom, as well. They’ve both attended the gifted program since elementary school, and have been involved in student council, National Honor Society, and are inherently competitive with each other. Jiminez is also a member of the Federal Reserve Student Board of Directors.

“I love the kids I have,” said Nellis. “They are a tremendous resource. If we can get more of them to get their degrees and come back then my job is done. There’s this great little band of talent that I have that we can go do things that other districts and other buildings can’t do.”

Nellis’ students will be competing at the LifeSmarts statewide challenge in Jefferson City later this month. He says the students will do well.

“I’m not bashful about pushing our kids out in these competitions,” said Nellis. “Even if they come in fourth, I have no problem being proud of those kids. The fact that they can even go out there and compete makes these truly great kids.”

Nellis is retiring at the end of the school year due to his wife’s health problems. His students from the last eleven years are his legacy. With students like Jiminez and Woodroof, it’s a legacy that will last well into the future.
Posted by JCAdvocate at 10:55 AM