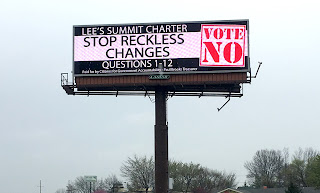 While Tuesday’s election in Grandview was fairly quiet with only one contested race and the Grandview C-4 bond issue vote, nearby Lee’s Summit residents saw numerous races and issues on their ballots. Included were 12 charter amendment questions for voters to approve. The City of Lee’s Summit’s charter is a document outlining the conditions under which the city is organized, and defining its rights and privileges. Under the Lee’s Summit City Charter, the document is reviewed by a commission of appointed citizens every ten years, and amendments or changes are put before voters.

In the weeks leading up to the election, community members in Lee’s Summit and other organizations were vocal about their efforts to not approve the charter amendments. One such organization, the Citizens for Government Accountability, paid for a “vote no” billboard along 50 Highway. The billboard asks Lee’s Summit voters to “stop reckless changes” and “vote no” on questions 1-12 of the Lee’s Summit Charter, listing Paul Brooks as treasurer.

Brooks, a detective with the Grandview Police Department, as indicated on nonprofit filing as of December 2, 2016 with the Missouri Secretary of State’s office, also serves as vice president for the West Central Missouri Regional Lodge No. 50 Fraternal Order of Police (FOP 50).

On April 1, Citizens for Government Accountability filed a contribution statement with the Missouri Ethics Commission, as required prior to the April 4 election. The report indicates that prior to this election cycle, the organization had a balance of $460.56, which included funds in depository, cash, savings accounts or other investments.

On November 28, 2016, according to the MEC report filed by the organization this month, the Grandview Police Employees Association Political Action Committee (GPEA) contributed $4840.66 to Citizens for Government Accountability, and is the sole contributor listed on the report.  Brooks is also listed as the registered agent for GPEA’s state filing.

According to Grandview Sergeant Brandon Grantham, who currently serves as GPEA’s president, he was unaware of any GPEA funds being used for the Citizens for Government Accountability’s political fight in Lee’s Summit. Grantham said that if a contribution was made under $1000, the organization’s board of directors would not have to vote on the disbursement, which would have come out of the Political Action Committee (PAC) account.

Grantham added that GPEA created the PAC account around three years ago, and with a balance of just under $5000, decided to, due to stringent paperwork and other tasks that had to be completed with the state, put their funding under the control of FOP 50.

“We did not have the manpower or the resource to keep up with that constant reporting,” said Grantham. “Paul Brooks is a part of that. Those funds are earmarked for us; however, they put it in their bank accounts to hold it. Basically, we can use it at any time.”

“We as a board have not approved anything like that for a donation or money to be given,” said Grantham. “The only thing we did was the transfer of that money to FOP 50, but I’m not aware, and I’d definitely be aware, of any money being used for something like that.”

Brooks, when contacted via his City of Grandview email address, responded with: “I will not and cannot discuss any type of political activity on city time or using city resources. I will attempt to contact you when I am available and not working. Please do not attempt to contact me using a city email or information.”

GPEA, FOP 50 and the Citizens for Government Accountability organizations are all listed in good standing with the Missouri Secretary of State. Grantham stated that GPEA has made no direct donations toward the political actions that the other organizations are taking in the Lee’s Summit community.

“I had no idea. GPEA should have nothing to do with that,” said Grantham. “We have no dog in that fight.”
Posted by JCAdvocate at 10:30 AM