Woman receives certificate of life thanks to local medical heroes 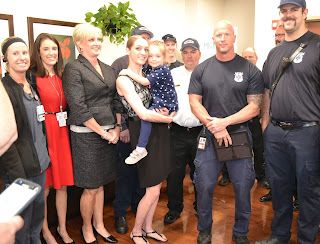 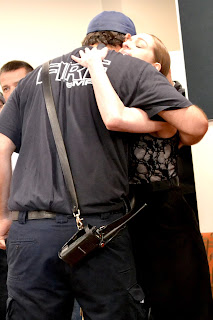 In the morning hours of December 12, 2016, South Kansas City resident Noelle Beck received a phone call she will never forget. Every mother’s worst nightmare was coming true for Beck on that cold day. Her 29-year-old daughter, Kayli Welvaert, was found not breathing by her boyfriend.

“He had gone out to start our cars and warm them up. I had gotten up, and went and lay back down in bed, and that’s all I remember,” said Welvaert.

Beck said that she doesn’t think her daughter was not breathing for too long before her boyfriend discovered her and called for emergency services. He noticed she was lying in a strange position,
possibly due to a seizure, and saw her lips were blue.

“He called 911 and started doing CPR, breathing for her and doing the chest compressions,” said Beck. “When he called them, the dispatcher walked him through how to do it.”
When EMT’s arrived and took over her care, Welvaert’s boyfriend then called her mom to let her know that she would be taken to Belton Regional Medical Center.

When she arrived to the hospital, Beck was informed that her daughter’s heart had to be revived three times. Beck and her husband were able to go immediately into Welvaert’s room with her, as she had been intubated and her medical team was working to get her stabilized.

“It was devastating seeing her like that,” said Beck. “You don’t think your daughter, at 29, is going to have a heart attack.”

Once Welvaert was stabilized and her seizures were under control, she was then taken by ambulance to Research Medical Center, where she would later receive a pacemaker and be released from the hospital within six days. While at Research, she was put into a medically-induced coma, and as she was brought out, it was a matter of waiting to see how Welvaert would respond.

“We just didn’t know how long she’d been out or how long she was without oxygen,” said Beck. “Then I started praying, and hoping for miracles to happen.”

Miraculously, Welvaert woke up. Depsite some short-term memory loss, she seemed relatively fine, given her circumstances and health history. With a new, clean bill of health, Welvaert returned to work a short time later.

“I just thank God every day for the people who gave me the care they did, from the woman who coached CPR over the phone to the doctors and nurses at the hospital, I am so very thankful,” said Welvaert.

On Tuesday, April 11, Welvaert had the opportunity to thank the individuals responsible for helping save her life. Belton Regional Medical Center hosted a Great Save event, and invited all of the first responders and the medical team who provided care for Welvaert.

“What a miracle and a blessing to be able to stand up here and look every one of you guys in the face and tell you, honestly, thank you so much,” Welvaert said to her team of medical professionals. “All of you can rest easy knowing that my four-year-old daughter, Hadley, has her mom.”

Welvaert said she wants others to know that despite age and health, medical scares can happen to anyone. This week, along with leadership from Belton Regional Medical Center, she was honored with a Certificate of Life and her entire medical team was recognized.

“This is what we do. This is who we are at Belton Regional Medical Center,” said BRMC CEO Todd Krass. “We are a team. I think this is the best example of our mission. I’m so proud of the work our team did that day.”
Posted by JCAdvocate at 4:00 PM