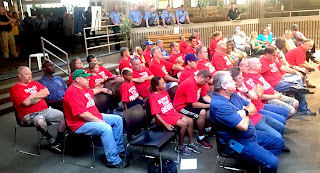 A war of words continues with Grandview elected officials and fire union leaders, with differing messages regarding pay and contract terms.

Even though it was a packed house at the Grandview Board of Aldermen meeting last week, the crowd wasn’t there to listen to the approval of ordinances or witness oaths being given to newly-appointed commissioners. Members of the local fire union, wearing red shirts in solidarity, were there to listen to supporters during the public comments portion of the meeting.

Tim Dupin, a former Grandview Fire employee in 1996 and currently the secretary and treasurer for the International Association of Firefighters Local 42 union, addressed the Mayor and Board of Aldermen as a representative of those who work for the Grandview Fire Department.

“Your firefighters are in a unique situation. They don’t have enough people to do the job,” said Dupin. “I left here, first and foremost, for my safety. You have the same amount of firefighters now that you had in 1996.”

He added that wages and benefits of the firemen, while not where they should be, are secondary to the safety concerns of Local 42. According to Dupin, the Grandview Fire Department calls for mutual aid of surrounding departments daily.

Grandview Mayor Leonard Jones stated that 46 percent of the upcoming Capital Improvement Sales Tax is to ensure that both police and fire personnel have the needed equipment to safely fulfill their respective responsibilities in the future. He added that the Board of Aldermen has also discussed other tax issues, including the public safety sales tax and the local use tax, and they plan to consider both of those in the coming months or year.

“During public comment at last week’s regular session, a number of people gave the impression that the police and fire departments were not trained and equipped to safely perform their duties,” said Jones. “This is not true now nor has it been true in the past. The Grandview residents that attended the Citizens Academy were shocked to hear such misleading and unverified comments last Tuesday.”

Dupin added that the National Fire Protection Agency standards are to have 15 firefighters to safely fight a fire, while Grandview has only 10-12 on duty at any given time.

“Do your job. Put it on the ballot,” said Dupin. “You want to shut me up and stop the social media posts? Do your job and stop kicking the can down the road. Support your men and women. Put their safety first. Put the safety of your citizens first and do your job of protecting Grandview. You’re not doing it right now.”

According to Jones, salaries are negotiated and evaluated with Local 42 on a regular basis, including overtime, sick leave, vacation and career development.

“We also realize that 85 percent of Fire Department calls are for EMS services, and they typically have about 20 structural fires a year,” Jones added. “Currently, we have significant reinforcements from Kansas City under our new EMD dispatching agreement.”

Kristina D’Agostino from Independence, whose husband has worked as a Grandview firefighter for the past 12 years, also addressed the elected officials during public comments. She claimed that the Grandview Fire Department is understaffed and underpaid. She also stated that some of the firemen in the department work upwards of 96 hour shifts due to lack of manpower.

“I am very concerned that nobody takes the time to address the safety of the fire department,” said D’Agostino. “These guys are exhausted. They need resources. They need safety. They need help.”

Grandview resident and president of the Belvidere Neighborhood Watch Pam Miller spoke of the vital role that the firefighters and police have in the community. She requested that the aldermen put on a future ballot to let Grandview voters decide on a one-percent tax increase for public safety.

“We all have a voice,” said Miller. “We have to make sure that we have public safety. We need more police. Grandview is a great place; we just need to invest more.”

Michael and JoLynn Lane, who are Grandview business owners, also urged the Grandview Board of Aldermen to consider an upcoming ballot issue to increase funding for public safety training and personnel.

“We have resources, they’re just not being allocated to the right spot,” said Michael Lane. “We need personnel. We need public safety. We need our fire department. Let the people speak.”

The City of Grandview is currently negotiating a new three-year agreement with Local 42 and plans to allow the negotiations to proceed to its conclusion this fall.
Posted by JCAdvocate at 10:26 AM