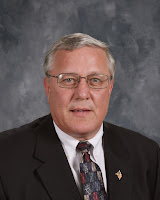 After being selected to fill the vacancy left by former Grandview School Board member Rachel Casey in 2013 and serving five years, President WayneTerpstra has submitted his resignation. According to Terpstra, a change in jobs and more travel on his schedule to help grow the company he works for led to his departure.

“I didn’t want to resign, but with me being gone all the time, it would have been more of a detriment to the Board and to the district than me staying,” said Terpstra. “In the last five months at work, we have hired in national sales guys, and with me being the resident expert, I am the guy that has to do out and do the training with the new sales force.”

“I wouldn’t be able to give them the support that they need,” he added. “It is best for me to step aside, allow them to reorganize and let someone else step in. I know it was a shock, but I felt it was the best time with no real issues for me to make that move.”

With Terpstra’s resignation, the Grandview Board of Education reorganized at their October 19 meeting. Leonard Greene will now serve as President and Ron Haley as Vice President. Terpstra’s unexpired term lasts through the next Board of Education election on April 3, 2018. Current board members will interview interested candidates who apply for the position.

“I feel pretty bad, because I’ve never quit anything and resigned in midterm,” said Terpstra. “I teach my kids when they start something they need to finish it. I just didn’t think I’d be able to give them the time and attention that they deserve.”

Terpstra said that he’d like to see someone from the community who has the time to be active and involved in the district step up to fill the vacancy.

“I never knew what the education system even was until I got involved in Board of Education,” he said. “I had no idea. You just take your kids and send them to school and expect someone to educate them. In today’s society, you just can’t do that. Our kids need guidance and advice to help them succeed.”

“I have a tremendous respect for the educators,” Terpstra added. “To get into the nuts and bolts of the administrators and staff, what always amazed me is the amount of attention and how they’re born to be in that position. It’s incredible to me.”

Interested applicants for the vacancy should submit a letter of intent to be considered for the available Board of Education position by November 17. Guidelines for the vacancy position are on page 2 of the print edition.
Posted by JCAdvocate at 10:11 AM