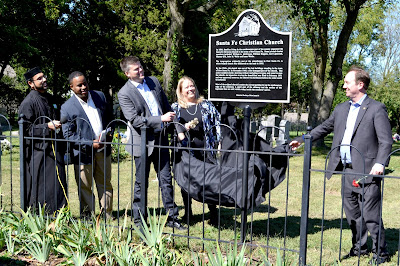 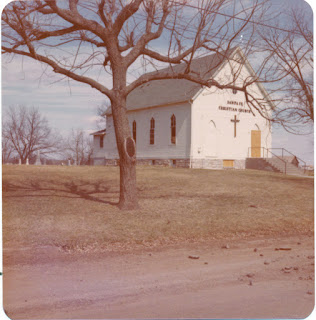 Hard work, dedication and a few tears paid off for one South Kansas City woman this past weekend. The culmination of research and interviews with locals came to fruition as Diane Euston, a local high school teacher and avid historian, along with members of the National Society of the Daughters of the American Revolution (NSDAR) Little Blue River Chapter and the Historical Society of New Santa Fe, held a homecoming ceremony for a former South Kansas City church.

On Saturday, October 7, the Santa Fe Christian Church received a permanent marker dedicated to the education of visitors to the area about the history of the landmark lost. Euston provided the history of the church to roughly 150 visitors who attended the ceremony.

In 1869, members of the Bethlehem Church of Christ organized a new congregation. The church organizers believed that the church community needed a burial ground for their loved ones, and in 1885, the New Santa Fe Cemetery was established. An adjacent lot was used for building the church. The Christian Church at New Santa Fe (later shortened to the Santa Fe Christian Church) was dedicated in 1892, and thrived through the years due to the hard work of the pioneer community.

“Every Friday, the women of the community would take fresh farm goods, like milk and eggs, by horse and buggy to Westport to sell to support their church,” said Euston. “The little church was the only true remainder of the town that was once here and attending the church became the reason to return to this community.”

“The new group essentially took the name that was already being used,” said Euston. “These pioneer families were unaware of the incorporation and what the future held.”

On November 14, 1969, at approximately 7 p.m., a fire started in a defective heating system, damaging the north side of the historic church. The fire chief stated that the structure was not severely affected and that the church could be restored to its former glory.

“It became clear, very clear, that not everyone was willing to save the little Santa Fe Christian Church,” said Euston.

In the spring of 1970, a secret vote was held to raze the church, and a restoration committee was quickly formed to prevent that from happening. The committee determined that if the funding was available to make the repairs to the church, there was no reason to destroy it, and they worked to raise money to save the building.

The restoration committee met with the trustees of the church to try and reason with them. According to Euston, one stated that the building would always smell like smoke, while another stated he was looking toward the future, not the past. In October of 1970, three trustees of the Christian Church at New Santa Fe signed a special warranty deed that dissolved the former organization. All legal rights were then given to the Santa Fe Christian Church, the same church organized in Grandview in 1965. One of the members said during a deposition that he believed what he was signing was simply a release of trusteeship.

“He had no idea that he had signed the church away to this new organization,” said Euston. “But that’s what happened.”

Estimates to fix the damage to the church were between $3000 and $10,000. Insurance paid the church over $20,000, and that money was in control of the new organization. Instead of repairing the old church, they bought the lot next door for $7000 and began construction on a new church.
Meanwhile, funds were still being raised to help restore the damaged building by the restoration committee. On February 7, 1971, they met with the new leadership to plead their case one last time to allow their church to be restored with private funds. The restoration committee and their supporters tried to vote, but were not allowed because they hadn’t been active members of the new church for at least 90 days. The vote proceeded without them and in the end, 17 out of 20 members voted to raise the church.

“66 minutes. All of this fight came down to just over an hour,” said Euston. “I can only imagine the shock and heartache that was left behind after this church was reduced to a pile of rubble.”

The restoration committee wasn’t going to give up their fight, and filed suit against the new church. A resolution was found four years later with the creation of the New Santa Fe Cemetery Association. The small burial ground was all that was left of the community, and it became their mission to save it from the new organization.

“In 1975, for $1, the new church organization sold the cemetery to this new committee,” said Euston. “Even as I recount all that I’ve learned, it still gives me goosebumps and it still shocks me. This church should still be standing. This is a revival, not of religious proportions, but of recollections, memories and the importance of preservation of historic landmarks. Today, we need to stand in celebration of a landmark lost.”

A common theme for the month of October for the Santa Fe Christian Church was homecoming celebrations. An annual homecoming service was held, drawing a large crowd of former members and friends of the church and provided fellowship for the entire community.

“A homecoming in southern church tradition is about the celebration of memories past,” said Euston. “It’s about finding a reason to gather together and reminisce. It is also a celebration of the future.”

Approximately two years to the day after the church was bulldozed, the Little Blue River Chapter NSDAR was being organized in Grandview. It would take another 42 years for the New Santa Fe Historical Society and the local NSDAR chapter to come together to apply for a special grant project to celebrate the historical value of the church that once stood on the grounds of New Santa Fe.

“Little Blue River, in 40 years, had never tackled anything like that before,” said Margo Aldridge, Regent with the Little Blue River NSDAR.  In 2015, Aldridge contacted Trailside Center volunteer Ann O’Hare to see if she knew of any local projects that needed funding.

The project received $1844 in an education grant from DAR and was sponsored by the local chapter. The project was originally submitted in 2015, and after being turned down the group resubmitted in 2016. They were notified in March of this year that the Santa Fe Christian Church dedication was approved for funding.

The final homecoming for the former members of the Santa Fe Christian Church revealed a permanent marker dedicated to its memory.
Posted by JCAdvocate at 10:02 AM