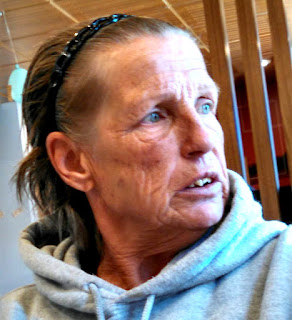 Chances are, if you’ve spent any time in downtown Grandview or along Blue Ridge over the past several years, you’ve likely run into 64-year-old Karen Harmeyer. Known in the community as a friendly, down-on-her-luck homeless woman, Harmeyer said she used to work as a nurse before her life took a turn.

Harmeyer was found murdered on July 19, her body discovered in a wooded area behind a church on Blue Ridge by those who checked on her regularly. Since then, due to no known relatives, her remains have been held at the Jackson County Medical Examiner’s office.

A group of local pastors and community members gathered together this week to give Harmeyer a proper funeral. With her remains being released to the community members, a service has been arranged for Tuesday, December 5, from 5-6 p.m., at Faith Ministries Community Church, 12222 Blue Ridge Blvd. in Grandview.

“We all feel very strongly that despite her chosen lifestyle, Karen deserves the dignity of a proper funeral and burial,” said local business owner Michael Lane. “There is nothing anyone can do about her senseless demise, but as community we can make sure she is laid to rest with the respect and dignity every human being deserves.”

The community is invited to Harmeyer’s memorial services, arranged with the help of Grandview Police Chaplain Lenny Laguardia. McGilley and George Funeral Home has donated a plot for her remains and Harmeyer will be laid to rest in Belton Cemetery.

“We cannot allow an act of senseless evil be the legacy,” said Lane. “Through her tragedy we as a community can show that good is more powerful then evil.”

Last month, Jackson County Prosecutors announced charges against Frederick Scott in connection to Harmeyer’s death. Scott is also facing charges in several other deaths in the South Kansas City area, though it is unknown what his involvement was in Harmeyer’s murder as details connecting Scott and Harmeyer have not been released.
Posted by JCAdvocate at 9:53 AM