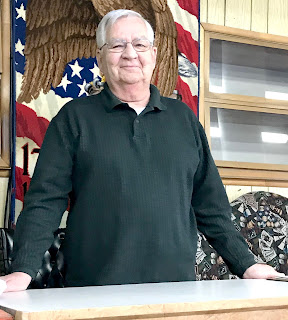 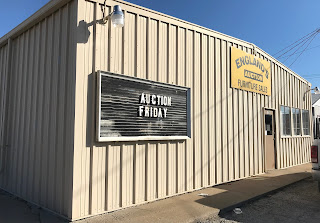 After 40 years, England’s Auction in Grandview will host its final sale on Friday, February 16. Over the last four decades, hundreds of buyers from all corners of the metro have spent their Friday evenings with Mike England.

In 1977, England, with his brother and father, purchased the auction business that began in 1960, at 1530 Duck Road in Grandview. Four years later, England purchased his family’s shares of the business. England’s Auction is the oldest operating auction house in Kansas City, a status that England is proud of.

“We’ve probably been the best kept secret in Grandview,” said England, a 1964 Grandview High School alum. “We have seen customers from all over the city. We’ve had thousands of customers.”

Early on, the auctions were twice a week, but eventually the sales were scheduled once weekly on Fridays. England’s four daughters grew up working in the family business, and he said the work is hard but never dull.

He now sees the grandchildren of customers who used to come to the auctions years ago. Most weeks, England said he sees roughly 200 people on Friday nights, and some of them are repeat customers who have reserved seating.

England’s Auction received most of their items to sell from estates, moving sales and storage delinquencies. England’s was the first auction company in the area to sell storage, and he handled the advertising and public notices for the warehouses. “I have contracts with storage companies all over the city,” said England. “There’s quite a bit of stuff involved with that. There’s a lot of trash. It’s evolved so much; there are now thousands of mini storage units.”

England’s Auction hauls the contents to their facility and prepares them for the weekly auctions. Each week on Mondays, England has walked into a nearly-empty building and is tasked with filling it with auction items in three days.  Items sold run the gamut from household items to furniture. England says they don’t sell anything pretentious and it’s never been fancy. Some nights England’s has done $200,000 in sales, and other nights $4,000.

“I’m probably the craziest auctioneer in Kansas City,” said England. “People come here for entertainment. Years ago, the Mayor would come up and hold stuff for me; then it was the Chief of Police. A lot of people know who we are.”

He doesn’t plan to retire completely, and will continue to piddle with auctioneering now and again. With his children grown, he is looking forward to spending some quality time with his wife of 51 years, Sheila.

“We’ve had only one vacation in 40 years,” said England. “When you work for yourself, you’re pretty much married to the business.”

According to England, his building has been sold to a local real estate rehabilitation company. As he prepares for the doors to close for a final time on Friday, England said that leaving his 40-year business is a little bittersweet because he built the company and it’s as if his best friend is dying.

“An auctioneer is a bit like a doctor,” said England. “All these people, they think I’m their best friend. Though, I’m not sure I’d want to invite them to dinner. But this business becomes personal. I wanted to quit while I was still vertical.”

When people would ask England how business was doing, he would always say, “It’s as good to me as I am to it.” He believes that if he wasn’t good to England’s Auctions, it wouldn’t have been good to him. Many folks in the community have spent their Friday nights at the auction, and England’s business has certainly been good to Grandview for 40 years.
Posted by JCAdvocate at 1:29 PM