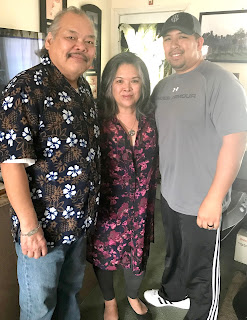 One Grandview family is hoping to change the way you hang your clothing with their invention. Majigeez (pronounced similar to thingamajigs) are flexible attachments that Jessica Del Rosario and her husband, Larry San Nicolas, came up with to prevent shoulder bumps and clothes falling off of everyday hangers.

“It all started with my son’s NFL jerseys, which he wore a bigger size in, that were really high dollar and we had to save money for,” said Del Rosario. “You can’t dry them and you don’t want to fold them, so we started modifying our hangers. We did that, just waiting for something to come out in the market so we could hang his clothes.”

Over the years, Del Rosario and her family continued to struggle with hanging their clothes properly, and instead of using hangers, she noticed her son would just stack his clothes on a table. Later, when another sibling was in junior high, Del Rosario noticed that her daughter’s clothes were all over the floor of her closet and not hanging up where they should be.

“I was rewashing things she hadn’t even worn because they’d been on the floor and had gotten all wrinkled,” said Del Rosario. “I told her I’d just start throwing all her clothes on the floor because that’s where they end up anyway. She then showed me that when she moved her clothes around on the hangers, they would fall off.”

It was then that Del Rosario decided to go back to the drawing board for her hanger modifications. From that point on, the family got busy making a prototype. Together with their son, Frank Arceo, they came up with the hanger attachments. Using materials around the house, San Nicholas came up with the first prototype that satisfied both Del Rosario and Arceo.

“Once we had the way, we tweaked it some and went to a patent attorney in 2011,” said Del Rosario. “After several years of battling, we finally landed our patent in 2016. We trademarked the name just before that. Our attorney kept giving us deadlines, and told us we had to come up with a name before we had the patent, so we had to figure out what to call it.”

Majigeez were born. With a background in drafting and design, Arceo worked with a manufacturer to come up with several different working prototypes that lived up to his mom’s idea and his dad’s model. During the design phase, they determined what current hangers were lacking. They discovered that hangers are rigid, too short for larger clothing; velvet hangers can cause bunching; toddler hangers are too small after a certain time; and wood hangers caused bumps in sweaters, leathers and jerseys.

Their product is the only resilient and flexible hanger attachment in the world. Majigeez are the only attachments that will fit on almost every household hanger, and they adapt to the weight of sweaters, shirts, jackets, blouses, and delicates to provide a natural curve. By attaching Majigeez to hangers (velvet, store, plastic, wire, and toddler), users can get the most out of hangers they already have. The product prevents shoulder bumps, and provides added benefits of hang-drying wet garments, extending the length of hangers (men’s 7XL and women’s 4XL), holding garments up to 10 pounds, and maximizing the longevity of toddler hangers into adult sizes.

“My mom, who is 89-years-old, can work these,” said Del Rosario. “We used her as our tester to make sure that anyone can attach them to hangers they have in their homes.”

The family has traveled to invention conventions, where their product was favorably received. While they eventually would like to seek out potential investors, Del Rosario said they hope to keep Majigeez in the family for as long as possible.

“We talked about partnering with a big company, but we decided not to go with them because it was a royalty type of agreement,” said Del Rosario. “That company would essentially own it all and give us a small percentage. We decided we want to try it out on our own; and in fact, our manufacturer encouraged us to.”

Majigeez will be sold in pairs of eight for $19.99, and their online retail store will be launching soon. In the meantime, Del Rosario and her family hope to sell their product at different merchandise shows and events. For more information, visit their website at www.majigeez.com, or follow Majigeez on Facebook.
Posted by JCAdvocate at 10:31 AM