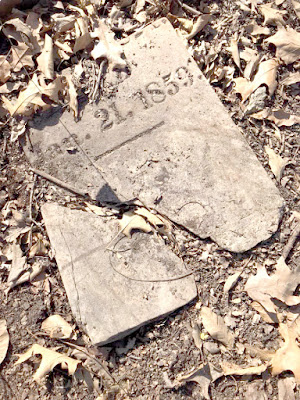 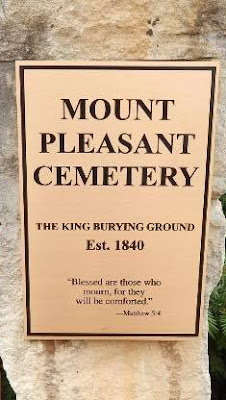 Leaves, sticks and debris from a south Kansas City cemetery were stuffed into 297 bags on a recent Saturday morning. The cemetery, tucked inside the Timber Hill Estates subdivision at 125th and Wornall, is an old community burial ground, holding generations-old memories that have long since been forgotten.

Mount Pleasant Cemetery was the final resting place for around 45 known people. Once known as the one-acre King Burial Ground, it has been overgrown and seen significant damage since the last known clean-up event took place in 2012. Local historian and teacher, Diane Euston, discovered the cemetery several years ago. After conducting her own research with the city and trying to gather information from the subdivision that now surrounds the grounds, she came up with more questions than answers.

“I knew the subdivision didn’t own it, and the City of Kansas City and Jackson County have little, if any, records on it, too,” said Euston. “I decided that we needed to work together, the subdivision and my volunteers, and get a group together including some of those who have family members buried there and work toward a common goal.”

After gaining permission for the clean-up from Timber Hill Estates, Euston called on area Boy Scouts, students from Avila University, and descendants of those buried at Mount Pleasant for whom she had contact information. According to Euston, a fence was installed by the subdivision developer around three-fourths of the cemetery, while shrubbery was planted along the northern side.

“From what I understand, when things fall inside the fence boundaries or the fence itself needs repaired, the subdivision is repairing it,” said Euston. “But when it comes to the contents of the actual cemetery, nothing is being done.”

Euston said there are several missing headstones, and most of those which are visible are in pieces. Some of the larger gravestones have gone missing within the last six years.  The last records that Euston has found of those buried at Mount Pleasant is from the Daughters of American Revolution’s 1934 history book. Family names include the Bargers, Holmeses, Hayses, Kings, Lees, McCraws, McPhersons, Sheltons and Sharps, along with several other individuals.

“The first burial, at least in 1934, that was on record according to the DAR is a Shelton, a five-year-old,” said Euston.

During the recent cleanup, Euston and the volunteers unearthed pieces of headstones, and uncovered pits where the ground has sunken into a burial site. Some of those sites have no markers or just fragments of a headstone near them.

With the nearly 300 bags of debris collected, there is still work to be done. Euston is organizing another cleanup effort at Mount Pleasant Cemetery for this Saturday, April 28, beginning at 9 a.m. Those interested in helping are encouraged to bring gloves, rakes and lawn bags. Euston would also like to reset the headstones. Hundreds of flags were placed where volunteers thought a grave might exist.

“We need a better report. We’re an operation of volunteers and no money,” Euston. “We would rather donate time and services and, eventually, maintenance of the cemetery, but we need help to get to that point.”

Euston would like to find someone willing to donate ground-penetrating radar services to determine where each grave is located in the cemetery. She also believes there may be an old slave burial ground on the site that she’d like to confirm. At Saturday’s cleanup, Grade A Tree Care has volunteered to help with the trimming and removal of large branches on the property.

With no ownership on file, it has been suggested to Euston that a cemetery board be incorporated, which would include descendants of those who are buried there to provide maintenance and upkeep of Mount Pleasant going forward.

Posted by JCAdvocate at 9:42 AM